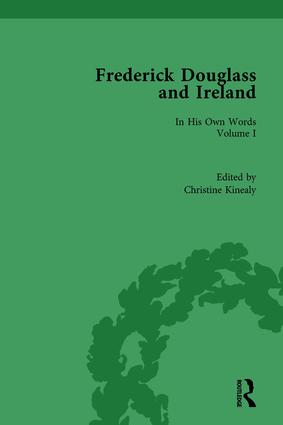 Book Description:
Frederick Douglass spent four months in Ireland at the end of 1845 that proved to be, in his own words, transformative’. He reported that for the first time in his life he felt like a man, and not a chattel. Whilst in residence, he became a spokesperson for the abolition movement, but by the time he left the country in early January 1846, he believed that the cause of the slave was the cause of the oppressed everywhere. For the remainder of his life, he became a champion of social justice for all, regardless of colour, gender, or ethnic origins. Douglass’s time in Ireland also coincided with the onset of the tragedy that, retrospectively, was referred to The Great Hunger’. When he commented on the poverty that was so pervasive in Ireland, he could not have known that he had witnessed the start of a humanitarian disaster that would change the world. This book adds new insight into Frederick Douglass and his time in Ireland. Contemporary newspaper accounts of the lectures that Douglass gave during his tour of Ireland (in Dublin, Wexford, Waterford, Cork, Limerick, and Belfast) have been located and transcribed. The speeches are annotated and accompanied by letters written by Douglass during his stay. In this way, for the first time, we hear Douglass in his own words. This unique approach allows us to follow the journey of the young man who, while in Ireland, discovered his own voice. Moreover, it provides a definitive catalogue of Douglass’s speech at a transformative time in his life, and in the development of the transatlantic anti-slavery movement.

More books like Frederick Douglass in Ireland: In His Own Words may be found by selecting the categories below:

Tell us what do you think about Frederick Douglass in Ireland: In His Own Words.