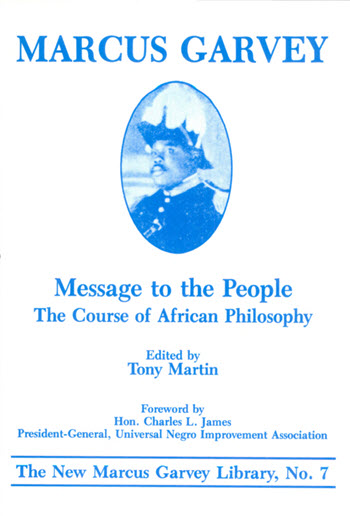 Message to the People: The Course of African Philosophy
by Tony Martin

In September 1937, three years before his death, Marcus Garvey assembled a small group of his most trusted organizers. For almost a quarter of a century he had led the Universal Negro Improvement Association, at its peak the largest international mass movement in the history of African peoples. Now he wanted to pass on the lessons he had learned, to the group best suited to carry the struggle forward. For one month he instructed this elite student body, twelve hours a day, seven days a week. The sessions were secret and much of the instruction was not written down. The students did, however receive written copies of twenty-two lessons, which Garvey called the Course of African Philosophy. This fascinating distillation of a great leader’s experience is published here for the first time.