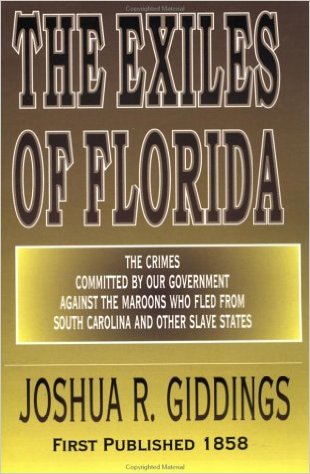 The Exiles of Florida
by Joshua R. Giddings

Book Description:
Joshua Giddings (1795-1864), an anti-slavery leader and a champion of free speech, was admitted to the bar in 1821 and went on to serve several terms in the United States Congress, where he seized every opportunity to expose the sophisms of the slaveocracy. One of the highlights of his term during the first session of the Thirty-ffith Congress was the publication of The Exiles of Florida: The Crimes Committed By Our Government Against the Maroons, Who Fled From South Carolina and Other Slave States, Seeking Protection Under Spanish Laws (1858).

An early indictment of slaveocracy, The Exiles of Florida is an account of the Florida Wars, which were waged by U.S. forces against an unoffending community of Blacks and Native Americans. Both groups were viewed as a threat to the status quo and the expansionist anthem of an emerging United States. In The Exiles of Florida, Giddings presents evidence of the United States Government’s deadly role in destroying this Florida community, where both Blacks and native Americans lived, worked, and actively resisted enslavement.