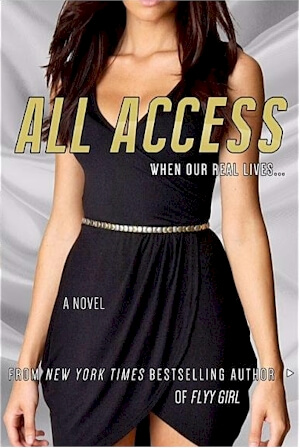 All Access: When Our Real Lives Become the Biggest ACT.
by Omar Tyree

Book Description:
When veteran Atlanta broadcast news anchor Judy Pierce joins a celebrity gossip website, she lands a major interview with volatile superstar Shawn Blake. The embattled entertainer then invites her into a reckless and unfiltered world that changes her life and career for the worse. Reported of having gang affiliations, domestic violence disputes, multiple child support cases and murder charges all of which never stick in court Blake is viewed by some as Hollywood s next Denzel Washington. But is this up-and-coming and troubled actor all that he’s rumored to be a real badass or is it only an act? Seeking confirmation, Judy gets involved in his all access invitations, and the fallout of rumors and social media attacks begin to unravel her family and job security. With a six-figure income, a dedicated husband, a solid reputation and two children in grade school, Judy has far too much to lose. Already in too deep, she finds herself in the middle of Shawn s volatile world of crime, desperate associations and public slander. Wishing she had never met the man, Judy scrambles to regain her sanity, while protecting her family… and her life.

More books like All Access: When Our Real Lives Become the Biggest ACT. may be found by selecting the categories below: