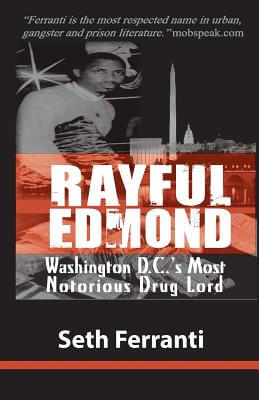 Book Description:
To many in his hometown of Washington, D.C., during his 1980s reign as the city’s biggest cocaine and crack dealer, Rayful Edmond was public enemy number one. At the height of Dodge City’s brutal crack epidemic in 1987, this 22-year-old man was responsible for distributing 60 percent of the cocaine that flooded the city’s streets. In the Chocolate City, Rayful was the undisputed king of cocaine. He was street royalty with a certified gangster resume. At his peak Rayful sold 2,000 keys a week, reaped gross profits of $70 million a month and ran an operation with over 150 soldiers to support him. By his early twenties he had established himself as the city’s most notorious drug kingpin. In the high profile and glamorous life he led, champagne flowed like water, trips to Las Vegas, New York and Los Angeles were commonplace and $50,000 shopping sprees were the routine. Rayful personified the big city drug lord and his stature epitomized all the accolades that position demanded. To the mainstream media, he encompassed all that was wrong with the city’s crack epidemic, but in the streets Rayful was a hero, an inner-city gangster who made it to the top echelons of the drug trade. A Lucky Luciano, Billy the Kid-type figure. But there were consequences to his reign. His volcanic rise coincided with an unprecedented explosion of street violence and drug addiction in the capital city. The era is remembered for murder, mayhem and bloodshed. Historians have blamed the crack storm that seized D.C. on Rayful, but Rayful maintained he was only trying to help his family live a better life and enjoy the finer materialistic trappings of capitalism that were often denied denizens of the ghetto. To the block huggers, four corner hustlers and hood mainstays Rayful was beloved, even worshipped. His appeal crossed boundaries and he was adored by children and adults alike. But to others he was feared, a man who wreaked havoc on his community. Neighborhood people saw the effects of his crack enterprise outside their front doors and it wasn’t pretty. A community divided was in essence, a community destroyed. But regardless of what people thought of Rayful, he was an enigma, the president and CEO of what authorities called “the largest network for cocaine street sales in Washington D.C.” He was a gangster legend of epic proportions, until he tarnished his legacy by turning snitch.

More books like Rayful Edmond: Washington D.C.’s Most Notorious Drug Lord may be found by selecting the categories below: