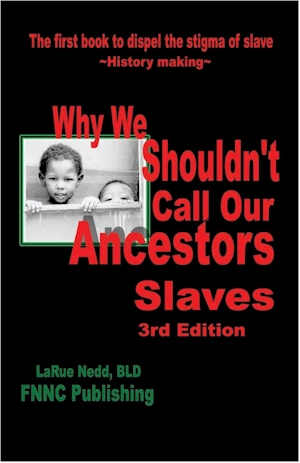 Why We Shouldn’t Call Our Ancestors Slaves
by LaRue Nedd

There was a time when everyone thought that the world was flat.

Because we have been bombarded with information that says our ancestors were slaves, it is not enough to say that our ancestors were not slaves. We must understand the logic and the effect that the word slave has on the mind and the spirit of Black people.

Many social programs, books and speeches have sought to raise the consciousness and quality of life for Black people. Still, the disparity widens because we have not gotten to the root of the problem. The success rates of these programs would be much higher if we had a more positive understanding of where we came from, our true Spirit and Nature, and who we are.

I am not saying that “slave” did not exist. I am saying that the word “slave” does not and should not be applied to the ancestors of Black African Americans or any African people. This book presents many good reasons why we should not call our ancestors or fore-parents slaves. Some of the main reasons are as follows:

More books like Why We Shouldn’t Call Our Ancestors Slaves may be found by selecting the categories below: