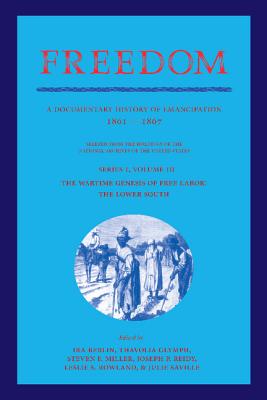 Freedom: Volume 3, Series 1: The Wartime Genesis of Free Labour: The Lower South: A Documentary History of Emancipation, 1861-1867
by Ira Berlin

Book Description:Union occupation of parts of the Confederacy during the Civil War forced federal officials to confront questions about the social order that would replace slavery. This volume of Freedom presents a documentary history of the emergence of free-labor relations in the large plantation areas of the Union-occupied Lower South. The documents illustrate the experiences of former slaves as military laborers, as residents of federally sponsored "contraband camps," as wage laborers on plantations and in towns, and in some instances, as independent farmers and self-employed workers. Together with the editors’ interpretative essays, these documents portray the different understandings of freedom advanced by the many participants in the wartime evolution of free labor—former slaves and free blacks; former slaveholders; Union military officers and officials in Washington; and Northern planters, ministers and teachers. The war sealed the fate of slavery only to open a contest over the meaning of freedom. This volume documents an important chapter of that contest. Ira Berlin is the Director of the Freedmen and Southern Society Project, University of Maryland.

More books like Freedom: Volume 3, Series 1: The Wartime Genesis of Free Labour: The Lower South: A Documentary History of Emancipation, 1861-1867 may be found by selecting the categories below: