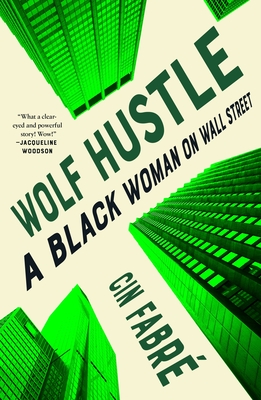 Read an Excerpt from Wolf Hustle: A Black Woman on Wall Street

From the South Bronx projects to the boardroom—at only nineteen years old, Cin Fabré ran with the wolves of Wall Street.

Growing up, Cin Fabré didn’t know anything about the stock market. But she learned how to hustle from her immigrant parents, saving money so that one day she could escape her abusive father and poverty in the Bronx.

Through a tip from a friend, Cin pushed her way into brokerage firm VTR Capital—an offshoot of Stratton Oakmont, the company where the Wolf of Wall Street, Jordan Belfort, had reigned. She was shocked to find an army of young workers, mostly Black and Brown, with no real prospects for promotion sitting at phones doing the drudge work of finding investment leads for white male brokers. But she felt the pull of profit and knew she would do whatever she had to do to be successful.

Pulling back the curtain on the inequities she and so many others faced, Wolf Hustle reveals how Cin worked grueling hours, ascending from cold caller to stockbroker, becoming the only Black woman to do so at her firm. She also discloses the excesses she took part in on 1990s Wall Street—the strip clubs, the Hamptons parties, the Gucci shopping sprees—while reveling in the thrill of making money.

From landing clients worth hundreds of millions to gaining, losing, then gaining back fortunes in seconds, Cin examines her years spent trading frantically and hustling successfully, grappling with what it takes to build a rich life, and, ultimately, beating Wall Street at its own game.

“What an amazing voice! What a clear-eyed and powerful story! Wow! She takes us back into her Haitian roots, through her life as a young person, and into the bowels of Wall Street to shine a deep and thoughtful light on everything from the Black immigrant experience in America to capitalism. Everyone needs to read this.”
—Jacqueline Woodson, bestselling author of Red at the Bone

“Long before the culture of Silicon Valley came to power, the Wall Street ‘bros’ established a business culture that lives for money, prizes excess and debauchery, and excludes women and people of color. In Wolf Hustle, Cin Fabré offers an engrossing and unflinching portrait of surviving and succeeding in an arena dominated by men, adding a welcome and necessary voice to the story of the financial foundation of America.”
—Emily Chang, author of Brotopia

“Extraordinary, electrifying and wholly inspiring, Wolf Hustle is a study in untamed audacity. Cin Fabré’s rebellious journey from a working class neighborhood to the peaks of Wall Street is a blueprint on boldly beating odds and daring to defy.”
—Zain E. Asher, anchor for CNN International and author of Where the Children Take Us