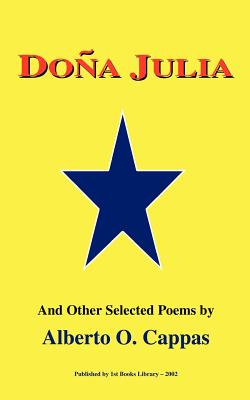 Read Our Review of Doña Julia

Book Description:
Clear. Natural. Poignant. These words accurately describe Alberto O. Cappas’ work.Cappas understands the suffering and struggles of Puerto Ricans living in Mainland America as well as in Puerto Rico. His poetry traces their hopes, problems, and misconceptions from the island to the mainland where they discover that dreams do die hard.In the poem ’Suicide of a Puerto Rican Jibaro,’ one need not be Puerto Rican to identify with the alienation faced when entering a cold, foreign, and jungle-like world. Cappas successfully explores what such a drastic change can mean for a Puerto Rican away from his island, where he is the majority. In ’…Jibaro,’ for the Puerto Rican man who emigrates to the United States, ’A million times his body was raped by the unfriendly cold… to pursue the American Dream…’Cappas is a relentless observer and commentator of what happens when a people leave their homeland, or forget where they come from, to pursue the uncertainties of the American Dream. His poetry, ironic at times, questions whether this dream does exist. In ’A Spoken Secret,’ ’Light skin Puerto Ricans forget to speak Spanish… and dark skin Puerto Ricans adopt hot combs to straighten their hair.’ In ’Doa Julia,’ a woman is trapped like a mouse in America and so commits suicide as a last attempt to return to her homeland. And in ’Maria,’ a young girl sits patiently thinking about her experiences in New York since leaving Puerto Rico and now waits ’for the overdose (of a drug) to take effect.’Of course this is not to say that all Puerto Ricans who emigrate to the United States end up killing themselves but it does show that Cappas is keenly aware of a sort of cultural and spiritual death that happens to Puerto Ricans and other Latinos when they leave the tropical scenes and adopt certain American values. In the ironic humorous poem, ’Her Boricua,’ a woman buys the Moon, tax-free, and invites her relatives and friends on weekend nights to ’admire the beauty of her new possessio

More books like Doña Julia may be found by selecting the categories below: