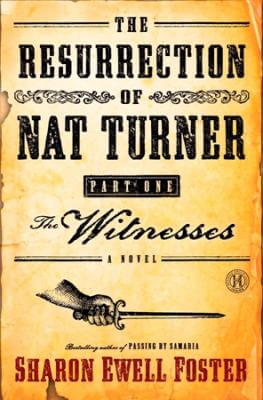 The Resurrection Of Nat Turner, Part 1: The Witnesses: A Novel
by Sharon Ewell Foster

Book Description:
The truth has been buried more than one hundred years . . .

Leading a small army of slaves, Nat Turner was a man born with a mission: to set the captives free. When words failed, he ignited an uprising that left over fifty whites dead. In the predawn hours of August 22, 1831, Nat Turner stormed into history with a Bible in one hand, brandishing a sword in the other. His rebellion shined a national spotlight on slavery and the state of Virginia and divided a nation’s trust. Turner himself became a lightning rod for abolitionists like Harriet Beecher Stowe and a terror and secret shame for slave owners.

In The Resurrection of Nat Turner, Part 1: The Witnesses, Nat Turner’s story is revealed through the eyes and minds of slaves and masters, friends and foes. In their words is the truth of the mystery and conspiracy of Nat Turner’s life, death, and confession.

The Resurrection of Nat Turner spans more than sixty years, sweeping from the majestic highlands of Ethiopia to the towns of Cross Keys and Jerusalem in Southampton County. Using extensive research, Sharon Ewell Foster breaks hallowed ground in this epic novel, revealing long-buried secrets about this tragic hero.

More books like The Resurrection Of Nat Turner, Part 1: The Witnesses: A Novel may be found by selecting the categories below: