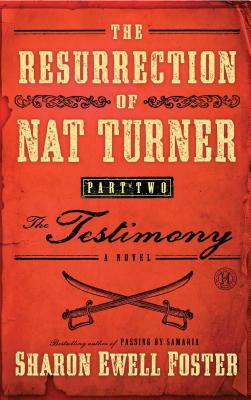 The Resurrection Of Nat Turner, Part 2: The Testimony: A Novel
by Sharon Ewell Foster

Paperback Description:
The sequel to The Resurrection of Nat Turner, Part I: The Witnesses shows the story of Nat Turner through his own eyes, from growing up a slave through his violent uprising and death.

In the predawn hours of August 22, 1831, slave Nat Turner stormed into history with a Bible in one hand and a sword in the other. Leading a small army of fellow slaves in an uprising that left more than fifty whites dead, Turner became a tragic hero and a lightning rod for abolitionists. His rebellion put Virginia in the national spotlight and tore a nation’s trust.

In Part I: The Witnesses, Harriet Beecher Stowe encounters a mysterious runaway slave who recounts stories of people who knew Nat Turner, both friends and enemies. In their words are the truth of the mystery and conspiracy of Turner’s life, death, and confession. Part 2: The Testimony, relates the whole story—from Turner’s early slave years with his Ethiopian-born mother through the uprising, his trial, and hanging—from Nat’s perspective. It’s a story full of greed and betrayal, faith and courage, villains and heroes.

More books like The Resurrection Of Nat Turner, Part 2: The Testimony: A Novel may be found by selecting the categories below: