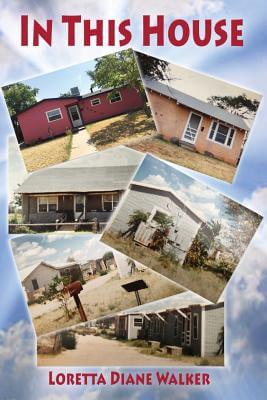 In This House
by Loretta Diane Walker

Loretta Diane Walker teaches music at Reagan Elementary in Odessa, Texas. She graduated from Ector High School, received a Bachelor of Music Education degree from Texas Tech University and earned a Master’s of Elementary Education from the University of Texas at the Permian Basin. Loretta is active in her community through membership in organizations such as, Delta Sigma Theta Sorority, Inc. and the Permian Basin Poetry Society. She is also a member of the Texas Music Educators Association, the Poetry Society of Texas, the Pennsylvania Poetry Society, Texas Mountain Trail Writers, the National Federation of State Poetry Societies, and serves as a volunteer at the Wagner Noel Performing Arts Center. Loretta is a multiple Pushcart Prize Nominee. Her poems and essays appear in publications throughout the United States, Canada, and the UK. Her book Word Ghetto won the 2011 Blue Light Press Book Award. Miss Walker was elected as the 2014 “Community Statesman in the Arts” by the Heritage of Odessa Foundation. ABOUT IN THIS HOUSE BY LORETTA DIANE WALKER: Loretta Diane Walker’s house of poems is majestic and delicate at once - immense in depth of vision and perception and tenderly sensitive in all the ways human beings need a house to be - with places to sit and remember, to treasure, and to tend. Her vibrantly descriptive poems honor the hardest days and rooms of being and believe in the beams of light coming back to us, once again, through the windows. They are poems as rich and wise as a profoundly conscious life. -Naomi Shihab Nye The deftly-written poems of In This House sing of life and loss, of illness and the courage to survive. Loretta Diane Walker’s poems inhabit the world of the body in struggle with diabetes and cancer with both honesty and tenderness, just as they do the world of the heart. To borrow a line from the poem, “Barbara,” these poems “blast beauty into the long chorus of night.” -Cindy Huyser, poet and editor, author of Burning Number Five: Power Plant Poems In these remarkable poems, Walker writes not only of courage in the face of adversity but also of motherhood, family, gender, race, the bounty of the natural world, and the nourishment art provides to the hunger of the human soul. Her talent as a musician infuses her lines with a haunting musicality which complements her mastery of image and diction. Walker’s poems glow on the page like candles in the darkness. -Larry D. Thomas, Member, Texas Institute of Letters, 2008 Texas Poet Laureate Loretta Walker shuttles through the curls of emotions in her powerful book of poetry, In This House. Describing her mother’s decline through diabetes, the delicate state of siblings comes through poems such as “In the Waiting Room"". Mama was rolled in with two legs;/ she will be rolled out with one./ We are waiting/ to see who can hold back tears the longest. There is story here. Story of strength and stamina. I will give you an orange dress, Mama./ It is the only color brave enough to carry your darkness/ in its pocket. We are touched by her portrayal of her nephew’s broken heart in “Shrine of Hormones” Because I love you more than the day you were born,/ I will not tell you she is just the beginning. Her lines are clever, moving; words that linger long after the poem, such as in “Jack” Jack Daniel’s been feasting on liver,/ without onions, since before the depression. Walker is a poet on the rise, her words like a mantra to all who read, such as in “How to Fight Like a Girl” You must learn to walk/ through the day with a fish of fear/ floating through/ the coral of your belly. Read this book. Keep it in your nightstand. You will reach for it again and again. -Karla K. Morton, 2010 Texas Poet Laureate

More books like In This House may be found by selecting the categories below:

Tell us what do you think about In This House.