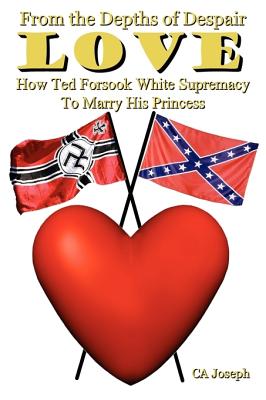 From The Depths Of Despair: Love: How Ted Forsook White Supremacy To Marry His Princess
by Ca Joseph

Book Description:
Ted was a member of the Ku Klux Klan and other clandestine White Supremacist Groups. He was the treasure of his deeply racist family, with expectations of him one day becoming a charismatic White Supremacist leader. But life changed in a flash. All it took was one hunting trip to shed the quasi-religious outlook encouraged by his alcoholic family members-his mom Jen, Uncle Rick, a drunken reverend of a Southern White Supremacist Church, and his father and grandfather, senior members in the Ku Klux Klan. During a college break, he attends a feral-hog hunting trip with his relatives. Sitting by a stream, drunk on backwoods Mississippi moonshine, Ted sees a sight that would test everything he believes. He spots an African American woman who steals his heart and mind. Ted embarks on a quest to find her ,battling his inner demons as he does. He realizes that she is the one, and that there is no force in the world more powerful than the four-letter word, LOVE. But not before plunging into the Depths of Despair!

More books like From The Depths Of Despair: Love: How Ted Forsook White Supremacy To Marry His Princess may be found by selecting the categories below:

Tell us what do you think about From The Depths Of Despair: Love: How Ted Forsook White Supremacy To Marry His Princess.