Manchild In The Promised Land
by Claude Brown

During his first year at Howard University, Claude Brown wrote an article for the magazine Dissent about growing up in Harlem. The piece attracted the attention of a publisher, who encouraged him to write his autobiography. The result, Manchild in the Promised Land, traces Claude Brown’s own transformation from a hardened, streetwise young criminal to a successful, self-made man.

This autobiographical novel, in print for more than thirty years, has been widely praised for its portrayal of the "lost" generation of African-Americans whose parents left the sharecropping lifestyle of the South for the crowded inner cities of the North. 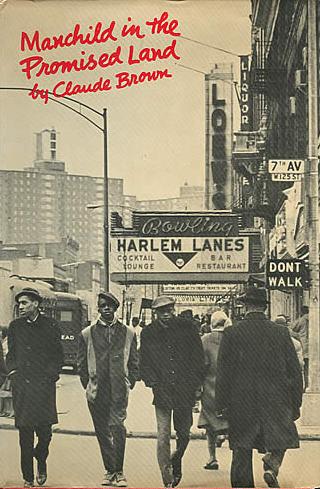 From Sacred Fire: The QBR 100 Essential Black Books
Manchild in the Promised Land is the story of the first generation of blacks who had left the South in search of a northern "promised land" of equality, abundance, and prosperity but found instead a vastly overcrowded and violent urban ghetto, a generation that went "from the fire into the frying pan."
"There was a tremendous difference in the way life was lived up North. There were too many people full of hate and bitterness crowded into a dirty, stinky, uncared-for, closet-sized section of a great city. The children of these disillusioned colored pioneers inherited the total lot of their parents,the disappointments, the anger. To add to their misery, they had little hope of deliverance. For where does one run to when he’s already in the promised land?" So begins Claude Brown’s literary masterwork.

Claude (Sonny boy) Brown wrote his extraordinary autobiography in his late twenties. At nine, he was a member of two notorious gangs who thrived on bullying and stealing. At eleven, he was sent to a school for "emotionally disturbed and deprived boys," where he stayed for two years; at fourteen, he was sent to a reformatory for the first of three times. In his mid-twenties, he would graduate from Howard University, and at thirty, he would start law school. Manchild in the Promised Land is the story of his life growing up in Harlem, to him a wondrous place where if you were quick, smart, and tough enough you could live, for a while, like a king or die like a pauper.

Books similiar to Manchild In The Promised Land may be found in the categories below: