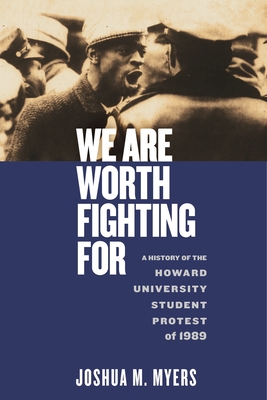 We Are Worth Fighting for (paperback): A History of the Howard University Student Protest of 1989
by Joshua M. Myers

We Are Worth Fighting For is the first history of the 1989 Howard University protest. The three-day occupation of the university’s Administration Building was a continuation of the student movements of the sixties and a unique challenge to the politics of the eighties. Upset at the university’s appointment of the Republican strategist Lee Atwater to the Board of Trustees, students forced the issue by shutting down the operations of the university. The protest, inspired in part by the emergence of "conscious" hip hop, helped to build support for the idea of student governance and drew upon a resurgent black nationalist ethos.

At the center of this story is a student organization known as Black Nia F.O.R.C.E. This group, co-founded by Ras J. Baraka (current mayor of Newark, NJ) and later led by current cultural arts entrepreneur April R. Silver, was at the forefront of organizing the student mobilization at Howard during the spring of 1989 and thereafter.

We Are Worth Fighting For explores how young Black student activists helped shape and resist the rightward shift and neoliberal foundations of American politics. This history adds to the literature on Black campus activism, Black Power studies, and the emerging histories of African American life in the 1980s.

More books like We Are Worth Fighting for (paperback): A History of the Howard University Student Protest of 1989 may be found by selecting the categories below: