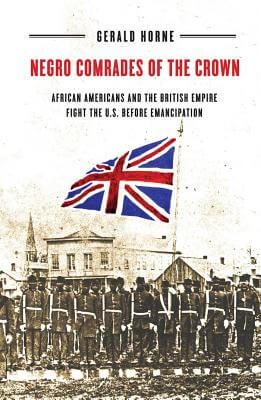 Negro Comrades of the Crown: African Americans and the British Empire Fight the U.S. Before Emancipation
by Gerald Horne

Book Description:
While it is well known that more Africans fought on behalf of the British than with the successful patriots of the American Revolution, Gerald Horne reveals in his latest work of historical recovery that after 1776, Africans and African-Americans continued to collaborate with Great Britain against the United States in battles big and small until the Civil War.

Many African Americans viewed Britain, an early advocate of abolitionism and emancipator of its own slaves, as a powerful ally in their resistance to slavery in the Americas. This allegiance was far-reaching, from the Caribbean to outposts in North America to Canada. In turn, the British welcomed and actively recruited both fugitive and free African Americans, arming them and employing them in military engagements throughout the Atlantic World, as the British sought to maintain a foothold in the Americas following the Revolution.

In this path-breaking book, Horne rewrites the history of slave resistance by placing it for the first time in the context of military and diplomatic wrangling between Britain and the United States. Painstakingly researched and full of revelations, Negro Comrades of the Crown is among the first book-length studies to highlight the Atlantic origins of the Civil War, and the active role played by African Americans within these external factors that led to it. Listen to a one hour special with Dr. Gerald Horne on the "Sojourner Truth" radio show.

More books like Negro Comrades of the Crown: African Americans and the British Empire Fight the U.S. Before Emancipation may be found by selecting the categories below: