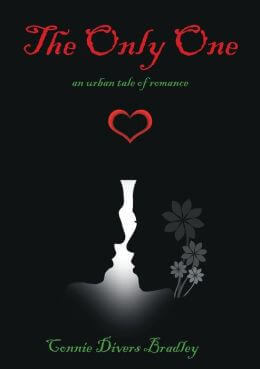 The Only One: An Urban Tale of Romance
by Connie Bradley

“The Only One is a novel about an interracial love triangle that will put the advice of self-appointed relationship guru, Steve Harvey, to shame.This is not your grandfather’s staid book. It’s your grandmother’s hot novel, a delicious slice of black life, serving up conflicted characters with appetites for lust, and cravings for romance, not to mention a serial killer looking for love in all the wrong places. Check it out!” —Connie Divers Bradley

Celeste Evans is clever, attractive and single. She is also burnt out. But when superfine Troy Briggs shows up in her life, her romantic hopes are re-ignited despite his showing a preference for Debbie Marlowe, their blond, blue-eyed co-worker. Not to be outdone, once this plucky “Sistergirl” decides to compete with a perky “Barbie doll” for the affections of a “color-blind brotha”, things get interesting. Also stalking the scene is a vicious serial killer who has his own way of dealing with the rocky road to love, and Celeste Evans is just his type! Full of plot twists, humor, and suspense, “The Only One” is an urban contemporary slice of life, a compelling novel that explores the complicated relationships that define black love.

Any book begins with inspiration, and the ongoing triangle that puts black women in competition with white ones for the affections of black men was mine. It’s a topic I’ve never read a book about so I became motivated to write The Only One, a novel based on this scenario. I wasn’t sure where this subject would lead me but, equipped with my personal observations and input from my children and their friends, I sat down at my computer, placed my fingers on its keyboard, accessed its word processor and got on the same wave length with my Muse.

The first step was to conjure up a cast of characters to star in this little melodrama, and this involved crafting the roles they would play in the plot. Once that was done, I visualized how they’d look and tried out names on them until they answered to what I called them. As soon as I started putting words in their mouths, these people came to life, steering me to where they needed to go.

Settling on a “sista” as my protagonist was what determined the book’s setting. A big city environment pulsating with the uniqueness of the black experience was what made Chicago the perfect choice.

Then, I got into the flow and let the words have their say. Realizing the value of taking a break, from time to time I would do so, then return to the manuscript with a new set of eyes. This was how I eventually recognized the need for a sub-plot that would add an element of suspense and keep things interesting. Filling this void called for a villain and he emerged from the shadows of my imagination, groping his groin.

With this addition, more inspiration kicked in showing me the technique for creating a mystery by inserting misleading clues to stump the reader.

Finally as one chapter led into another, the story ran its course. All the scattered parts came together completing the puzzle that had been waiting to be assembled by the creative process that turns writers into authors, and an idea into a book. At this point, my characters met their fate and faded to black.

Months later, I held the latest version of The Only One in my hands. It was fresh off the press and it was if it vibrated with life!

Books similiar to The Only One: An Urban Tale of Romance may be found in the categories below: