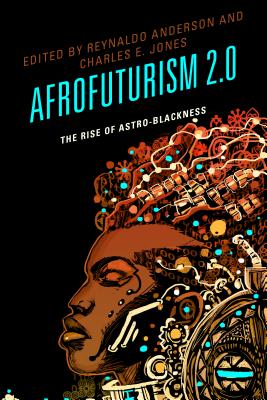 Afrofuturism 2.0: The Rise of Astro-Blackness
by Reynaldo Anderson and Charles E. Jones

Hardcover Description:
The ideas and practices related to afrofuturism have existed for most of the 20th century, especially in the north American African diaspora community. After Mark Dery coined the word "afrofuturism" in 1993, Alondra Nelson as a member of an online forum, along with other participants, began to explore the initial terrain and intellectual underpinnings of the concept noting that “AfroFuturism has emerged as a term of convenience to describe analysis, criticism and cultural production that addresses the intersections between race and technology.” Afrofuturism 2.0: The Rise of Astroblackness represents a transition from previous ideas related to afrofuturism that were formed in the late 20th century around issues of the digital divide, music and literature. Afrofuturism 2.0 expands and broadens the discussion around the concept to include religion, architecture, communications, visual art, philosophy and reflects its current growth as an emerging global Pan African creative phenomenon.

More books like Afrofuturism 2.0: The Rise of Astro-Blackness may be found by selecting the categories below: