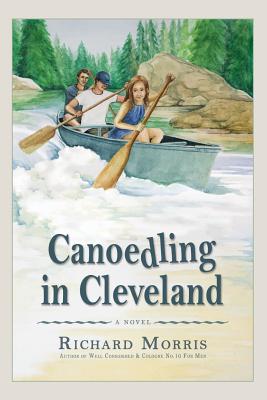 Canoedling In Cleveland
by Richard Morris

Book Description:
SECOND EDITION, AUGUST 2016, WITH FOUR NEW ILLUSTRATIONS: In the summer of 1960 before his senior year in high school, Jeff Klossen canoodles friends Randy and Lori into joining him in canoeing every lake and stream around Cleveland. Dynamics between the teens change as they battle rapids, and waters poisoned by pollution. Though at first the boys assume the lead, Lori’s daring and determination win her admiration and an equal place on the team. As Jeff and Lori become interested in each other, their conversations lead them to investigate the racial segregation of their neighborhood. After a canoeing accident on an angry Lake Erie, they meet Walter Madison from the black part of the city, and Jeff and Lori wonder if they can make him and his friend Sarah a part of their lives. In the end, the pair confront both race relations and environmental damage in the city. Novelist-poet-playwright Stanford Pritchard describes it thus: “Canoedling in Cleveland is a really nifty book: much more dark, and varied, than the early chapters suggest it’s going to be. It has treachery, tragedy, love, acceptance, and forgiveness. Even though nobody gets off easy, and this is by no means a feel-good story, it’s full of hope and idealism. It’s a bittersweet, deeply touching coming-of-age tale. What starts as an innocent summer pastime gradually forces five young people to confront both the limits of personal friendship, and the hard injustices of the larger world. Swept along on ever more powerful currents, their journey becomes as steeped in tender memory as the film ’Summer of ’42’, and as timeless as Huckleberry Finn.” In the 23rd Annual Writer’s Digest Self-Published Book Awards, the judge issued five points (“outstanding”) in each of the six categories evaluated and concluded with the sentence, “Morris has done a wonderful job, creating a book that deserves a place in every middle school and high school library.”

More books like Canoedling In Cleveland may be found by selecting the categories below: