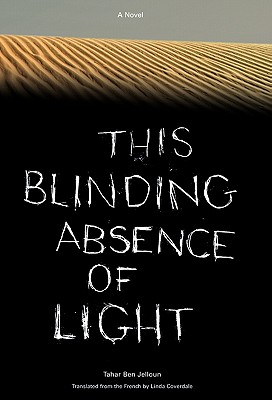 This Blinding Absence of Light: A Novel
by Tahar Ben Jelloun

Book Description:
An immediate and critically acclaimed bestseller in France and winner of the 2004 International IMPAC Dublin Literary Award, This Blinding Absence of Light is the latest work by Tahar Ben Jelloun, the first North African winner of the Prix Goncourt and winner of the 1994 Prix Mahgreb. Ben Jelloun crafts a horrific real-life narrative into fiction to tell the appalling story of the desert concentration camps in which King Hassan II of Morocco held his political enemies under the most harrowing conditions. Not until September 1991, under international pressure, was Hassan’s regime forced to open these desert hellholes. A handful of survivors—living cadavers who had shrunk by over a foot in height—emerged from the six-by-three-foot cells in which they had been held underground for decades.Working closely with one of the survivors, Ben Jelloun eschewed the traditional novel format and wrote a book in the simplest of language, reaching always for the most basic of words, the most correct descriptions. The result is a shocking novel that explores both the limitlessness of inhumanity and the impossible endurance of the human will.

More books like This Blinding Absence of Light: A Novel may be found by selecting the categories below: