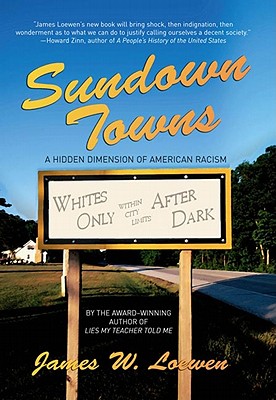 The explosive story of racial exclusion in the north, from the American Book Award-winning author of Lies My Teacher Told Me

As American as apple pie:
• Most suburbs in the United States were originally sundown towns.
• As part of the deepening racism that swept through the United States after 1890, town after town outside the traditional South became intentionally all-white, evicting their black populations with tactics that ranged from intimidation to outright violence.
• From Myakka City, Florida, to Kennewick, Washington, the nation is dotted with thousands of all-white towns that are (or were until recently) all-white on purpose. Sundown towns can be found in almost every state.

"Don’t let the sun go down on you in this town." We equate these words with the Jim Crow South but, in a sweeping analysis of American residential patterns, award-winning and bestselling author James W. Loewen demonstrates that strict racial exclusion was the norm in American towns and villages from sea to shining sea for much of the twentieth century.

Weaving history, personal narrative, and hard-nosed analysis, Loewen shows that the sundown town was—and is—an American institution with a powerful and disturbing history of its own, told here for the first time. In Michigan, Indiana, Ohio, Illinois, Missouri, Pennsylvania, and elsewhere, sundown towns were created in waves of violence in the early decades of the twentieth century, and then maintained well into the contemporary era.

Sundown Towns redraws the map of race relations, extending the lines of racial oppression through the backyard of millions of Americans—and lobbing an intellectual hand grenade into the debates over race and racism today.

More books like Sundown Towns may be found by selecting the categories below: