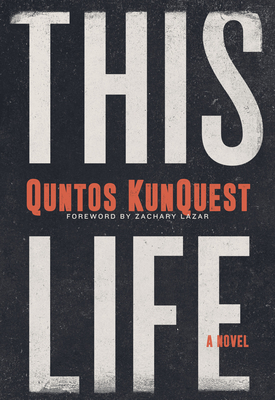 Paperback Description:
This Life is the debut novel by Quntos KunQuest, a longtime inmate at Angola, the infamous Louisiana State Penitentiary. This marks the appearance of a bold, distinctive new voice, one deeply inflected by hiphop, that delves into the meaning of a life spent behind bars, the human bonds formed therein, and the poetry that even those in the most dire places can create.

Lil Chris is just nineteen when he arrives at Angola as an AU—an admitting unit, a fresh fish, a new vict. He’s got a life sentence with no chance of parole, but he’s also got a clear mind and sharp awareness—one that picks up quickly on the details of the system, his fellow inmates, and what he can do to claim a place at the top. When he meets Rise, a mature inmate who’s already spent years in the system, and whose composure and raised consciousness command the respect of the other prisoners, Lil Chris learns to find his way in a system bent on repressing every means he has to express himself.

Lil Chris and Rise channel their questions, frustrations, and pain into rap, and This Life flows with the same cadence that powers their charged verses. It pulses with the heat of impassioned inmates, the oppressive daily routines of the prison yard, and the rap contests that bring the men of the prison together. This Life is told in a voice that only a man who’s lived it could have—a clipped, urgent, evocative voice that surges with anger, honesty, playfulness, and a deep sense of ugly history. Angola started out as a plantation—and as This Life makes clear, black inmates are still in a kind of enslavement there. This Life is an important debut that commands our attention with the vigor, dynamism, and raw, consciousness-expanding energy of this essential new voice.

More books like This Life may be found by selecting the categories below: