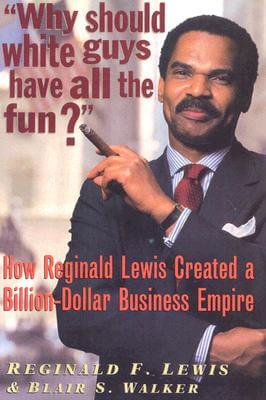 Why Should White Guys Have All The Fun?: How Reginald Lewis Created A Billion-Dollar Business Empire
by Reginald F. Lewis and Blair S. Walker

Paperback Description:
Why Should White Guys Have All the Fun? is the inspiring story of Reginald Lewis: lawyer, Wall Street wizard, philanthropist — and the wealthiest black man in American history.

When six-year-old Reginald Lewis overheard his grandparents discussing employment discrimination against African Americans, he asked, “Why should white guys have all the fun?" This self-assured child would grow up to become the CEO of Beatrice International and one of the most successful entrepreneurs ever. At the time of his death in 1993, his personal fortune was estimated in excess of $400 million and his vast commercial empire spanned four continents. Despite the notoriety surrounding Lewis’s financial coups, little has been written about the life of this remarkable man. Based on Lewis’s unfinished autobiography, as well as scores of interviews with family, friends, and colleagues, the book cuts through the myth and media hype to reveal the man behind the legend. What emerges is a vivid portrait of a proud, fiercely determined individual with a razor-sharp tongue — and an intellect to match — who would settle for nothing less than excellence from himself and others.

More books like Why Should White Guys Have All The Fun?: How Reginald Lewis Created A Billion-Dollar Business Empire may be found by selecting the categories below: