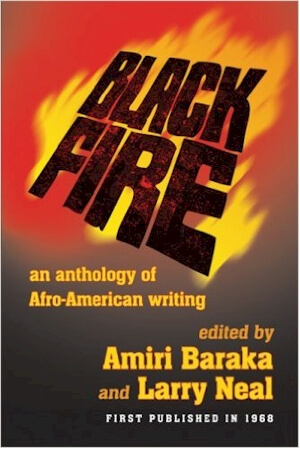 Black Fire: An Anthology of Afro-American Writing was originally published in 1968. This important work is kept in print by the efforts of Black Classic Press.

The defining work of the Black Arts Movement, Black Fire: An Anthology of Afro-American Writing is at once a rich anthology and an extraordinary source document. Nearly 200 selections, including poetry, essays, short stories, and plays, from over 75 cultural critics, writers, and political leaders, capture the social and cultural turmoil of the 1960s. In his new introduction, Amiri Baraka reflects — nearly four decades later — on both the movement and the book. 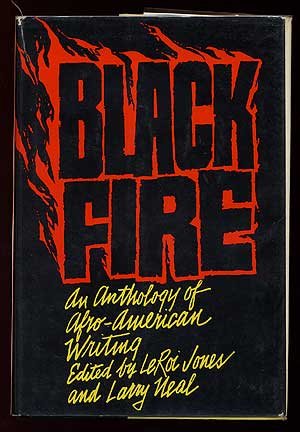 While many texts are readily available chronicling the Black Power Movement, the same cannot be said for its ’aesthetic and spiritual sister,’ the Amiri Baraka and Larry Neal, co-editors and contributors to this volume, saw Black Fire as a manifesto to bring about change in Black thought and action, generated from a Black aesthetic. Often considered the seminal work from the Black Arts Movement, Black Fire is a rich anthology and an extraordinary source document, presenting 178 selections of poetry, essays, short stories and plays from cultural critics, literary artists and political leaders. Many of the contributors became prominent, nationally and internationally. Others receded into the cultural landscape, even before Black Fire’s first publication in 1968. Included in this groundbreaking volume are essays by John Henrik Clarke, Kwame Ture (Stokely Carmichael), Harold Cruse, and A.B. Spellman; poetry by Askia Toure, Sonia Sanchez, Gaston Neal, Stanley Crouch, Calvin C. Hernton, and surprisingly Sun-Ra; fiction by Julia Fields and drama from Ed Bullins. Sixty-three additional contributors round out this comprehensive work.

These are the wizards, the bards, the babalawo, the shaiks, of Weusi Mchoro. These descriptions will be carried for the next thousand years

We are being good. We are the beings of goodness, again. We will be righteous and our creations good and strong and righteous, and teaching. The teaching and the descriptions. The will and the strength. Songs, chants, ‘bad sh*t goin down,’ rendered as the light beam of God warms your hearts forever. Forget, and reget. Reget and forget. Where it was. This is the source, Kitab Sudan. The black man’s comfort and guide. Where we was we will be agin. Tho the map be broke and thorny tho the wimmens sell they men, then cry up hell to get them back our here agin. In the middle of my life, In the middle of our dreams. The black artist. The black man. The holy holy black man. The man you seek. The climber the striver. The maker of peace. The lover. The warrior. We are they whom you seek. Look in. Find yr self. Find the being, the speaker. The voice, the back dust hover in your soft eyeclosings. Is you. Is the creator. Is nothing. Plus or minus, you vehicle! We are presenting. Your various selves. We are presenting from God, a tone, your own. Go on. Now.” —Amiri Baraka, From the Foreword<

Books similiar to Black Fire: An Anthology of Afro-American Writing may be found in the categories below: