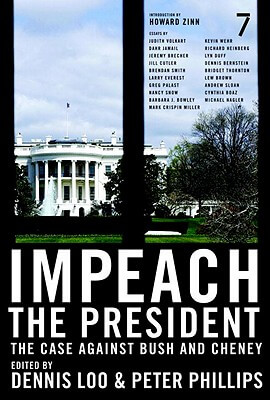 Impeach The President: The Case Against Bush And Cheney
by Dennis Loo and Peter Phillips

Paperback Description:
This brilliantly argued and wonderfully written collection by twenty-two of the best political analysts in the US analyzes the extraordinary and unprecedented threat the White House and its allies present to civil liberties, civil rights, the Constitution, international law, and the future of the planet.
Impeach the President unearths the stories behind election fraud in 2000 and 2004, the overt lies used to justify pre-emptive war on Iraq, the extensive, ongoing commission of war crimes and torture, the tragic failures in the lead-up to and aftermath of Hurricane Katrina, and lesser-known but equally alarming offences of propaganda and disinformation, illegal spying, environmental destruction, and the violation of the separation of church and state. Loo and Phillips chillingly reveal the full threat behind the radical right-wing force that has taken over the world’s most powerful office.

More books like Impeach The President: The Case Against Bush And Cheney may be found by selecting the categories below: