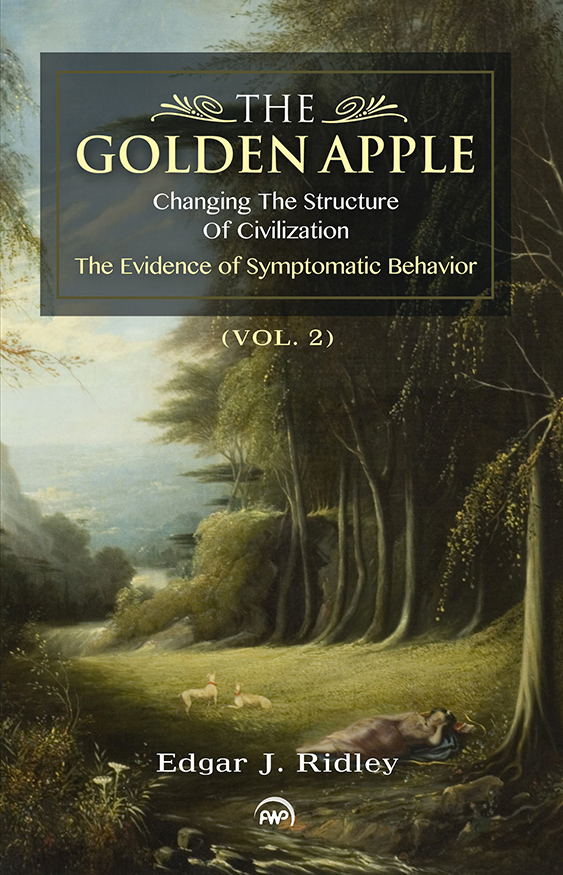 The Golden Apple: Changing the Structure of Civilization, The Evidence of Symptomatic Behavior - Vol. 2
by Edgar J. Ridley

This book, the second in a three-volume series, shows the destructive nature that symbolic thought has on civilization and the need for a transition to symptomatic thought and behavior.

Ridley demonstrates how the experts in the cognitive sciences, including all fields of anthropology, misrepresent the way symbols affect the neurological processes of the human brain. The author shows that the traditional belief that symptoms are inferior to symbols is erroneous, and that this belief has caused unspeakable cruelty and conflict the world over.

Ridley reaffirms his original thesis that man suffered a neurological misadventure in prehistory that caused the beginning of symbolic behavior. Symbolic thinking, a learned behavior, is not innate to the neurological processes of the brain, and must be eliminated.

The author has combed through the literatures of the world to show the reader how James Frazer’s Golden Bough and Cheikh Anta Diop’s Civilization or Barbarism inform the discussion of human behavior from antiquity to modern man. Frazer illustrated how symbol systems caused humans to not only mythologize each other, but human history, in a way that the great Senegalese scholar, Cheikh Anta Diop, called "the most monstrous falsification in the history of mankind."

"Edgar J. Ridley provides a detailed explanation of the differences between symbolic behavior and symptomatic thought processes and examines their implications for political and social order. His argument that symbols have historically-and even contemporaneously-been used or misused to advance causes inimical to society, for example, racist or religious bigotry, is one that should elicit deep reflection and prompt public policies that foster economic and political inclusivity in an era of globalization. His emphatic preference for symptomatic behavior as a tool for promoting greater harmony is consistent with efforts to promote regional stability and global peace and security."
—Ejeviome Eloho Otobo, formerly Director and Deputy Head of the Peacebuilding Support Office at the United Nations Headquarters in New York, is currently Non-Resident Senior Expert for Peacebuilding and Global Economic Policy at the Global Governance Institute, Brussels

Books similiar to The Golden Apple: Changing the Structure of Civilization, The Evidence of Symptomatic Behavior - Vol. 2 may be found in the categories below: