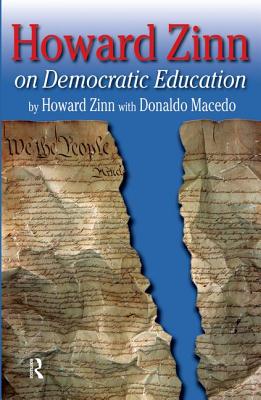 Book Description:
Perhaps no other historian has had a more profound and revolutionary impact on American education than Howard Zinn. This is the first book devoted to his views on education and its role in a democratic society. Howard Zinn on Democratic Education describes what is missing from school textbooks and in classrooms-and how we move beyond these deficiencies to improve student education. Critical skills of citizenship are insufficiently developed in schools, according to Zinn. Textbooks and curricula must be changed to transcend the recitation of received wisdom too common today in schools. In these respects, recent Bush Administration and educational policies of most previous US presidents have been on the wrong track in meeting educational needs. This book seeks to redefine national goals at a time when public debates over education have never been more polarised—nor higher in public visibility and contentious debate. Zinn’s essays on education-many never before published—are framed in this book by a dialogue between Zinn and Donaldo Macedo, a distinguished critic of literacy and schooling, whose books with Paulo Freire, Noam Chomsky and other authors have received international acclaim.

More books like Howard Zinn on Democratic Education may be found by selecting the categories below:

Tell us what do you think about Howard Zinn on Democratic Education.