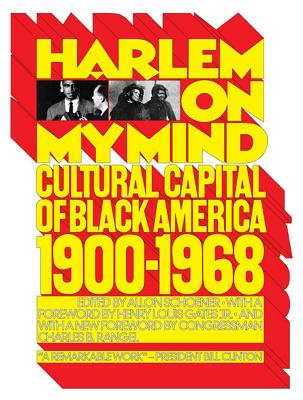 Harlem on My Mind: Cultural Capital of Black America, 1900-1968
by Allon Schoener

Long before Harlem became one of the trendiest neighborhoods in the red-hot real estate market of Manhattan, it was a metaphor for African American culture at its richest. Allon Schoener’s celebrated Harlem on My Mind is the classic record of Harlem life during some of the most exciting and turbulent years of its history, a beautiful—and poignant—reminder of a powerful moment in African America history.

Including the work of some of Harlem’s most treasured photographers, among them James Van Der Zee and Gordon Parks, there are photographs of Harlem’s literary lights—Langston Hughes, Countee Cullen, and Richard Wright; its politicians—Marcus Garvey, Malcolm X, and Adam Clayton Powell Jr.; and its musicians—Ethel Waters, Duke Ellington, and Billie Holiday. The book also includes the photographs of the everyday folk who gave life to this legendary community.

These extraordinary images are juxtaposed with articles from publications such as the New York Times and the Amsterdam News, which have helped to record the life of one of New York’s most memorialized neighborhoods.

Originally published in 1969 as the catalogue to the Metropolitan Museum of Art’s controversial exhibition of the same name, Harlem on My Mind is as compelling today as it was when first published.

"In Harlem on My Mind one witnesses it all—the joys, sorrows, and triumphs of this mecca of black achievement. Along with the visual excitement are fascinating articles that reveal Harlem as it was in the early 1900s, as it is today, and what one might expect from it in the future. It is an important contribution, not only to the history of Harlem, but to the history of America." —Gordon Parks "Harlem on My Mind represents months and years of research that would be impossible to duplicate today. It should be considered a history of the times; it is important for the present generation and coming generations… . No household, school, or library should be without it." —James Van Der Zee

Books similiar to Harlem on My Mind: Cultural Capital of Black America, 1900-1968 may be found in the categories below: