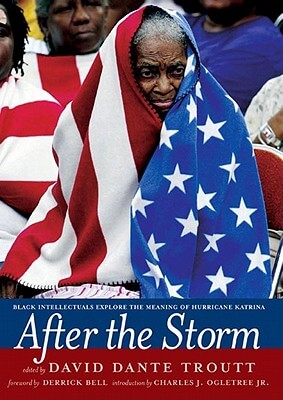 After the Storm: Black Intellectuals Explore the Meaning of Hurricane Katrina
by David Dante Troutt

Paperback Description:
Now in paperback on the second anniversary of Katrina, one of the few books to offer the perspectives of African Americans on the Gulf Goast tragedy.

Available for the first time in paperback after selling out its hardcover print run and being frequently named among the best of the Katrina books, After the Storm offers "angry, learned, focused, readable, [and] essential" writing, according to Library Journal, in which contributors face what Ebony magazine calls "questions about poverty, housing, governmental decision-making, crime, community development and political participation, which were raised in the aftermath of the storm."

Featuring the work of leading African American intellectuals, including Derrick Bell, Charles Ogletree, Michael Eric Dyson, Cheryl Harris, Devon Carbado, Adolph Reed, Sheryll Cashin, and Clement Alexander Price, After the Storm suggests "precisely what we must do if we are to both save the planet and create the great towns and cities that we can proudly bequeath to future generations" (Socialist Review).

More books like After the Storm: Black Intellectuals Explore the Meaning of Hurricane Katrina may be found by selecting the categories below: