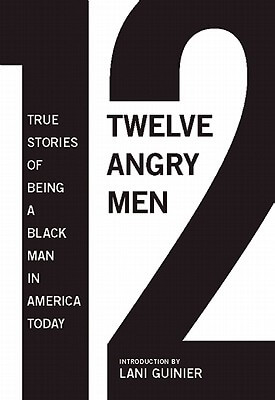 12 Angry Men: True Stories Of Being A Black Man In America Today
by Gregory S. Parks and Matthew W. Hughey

Read Our Review of 12 Angry Men: True Stories Of Being A Black Man In America Today

Hardcover Description:
Called a book that "is factual yet reads like a novel" on the Huffington Post, 12 Angry Men reveals some pointed truths about our nation as a dozen African American authors from across the United States tell their personal stories of being racially profiled.

In this "extraordinarily compelling" (Publishers Weekly) book, we hear tales of injustice from Joe Morgan, a former Major League Baseball MVP; Paul Butler, a federal prosecutor; Kent, a devoted father hauled into central booking for trespassing and loitering when he visits his mother’s housing project; Solomon Moore, a former criminal justice reporter for the New York Times; and King Downing, a former head of the ACLU’s racial profiling initiative.

In an era of contentious debate about controversial police practices and, more broadly, the significance of implications of race throughout American life, 12 Angry Men is an urgent, moving, and timely book that exposes "a serious impediment to the collective American Dream of a colorblind society" (Pittsburgh Urban Media).

More books like 12 Angry Men: True Stories Of Being A Black Man In America Today may be found by selecting the categories below: