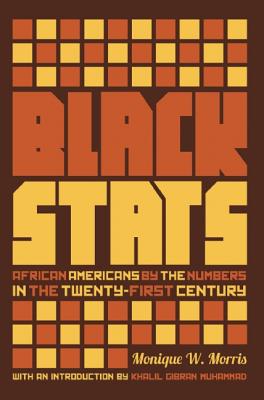 Black Stats: African Americans by the Numbers in the Twenty-first Century
by Monique W. Morris

Book Description: Black Stats a comprehensive guide filled with contemporary facts and figures on African Americans is an essential reference for anyone attempting to fathom the complex state of our nation. With fascinating and often surprising information on everything from incarceration rates, lending practices, and the arts to marriage, voting habits, and green jobs, the contextualized material in this book will better attune readers to telling trends while challenging commonly held, yet often misguided, perceptions.

A compilation that at once highlights measures of incredible progress and enumerates the disparate impacts of social policies and practices, this book is a critical tool for advocates, educators, and policy makers. Black Stats offers indispensable information that is sure to enlighten discussions and provoke debates about the quality of Black life in the United States today and help chart the path to a better future.

A 2010 study found that 41 percent of Black youth feel that rap music videos should be more political. There are no Black owners or presidents of an NFL franchise team. 78 percent of Black Americans live within 30 miles of a coal-fired power plant, compared with 56 percent of White Americans.

More books like Black Stats: African Americans by the Numbers in the Twenty-first Century may be found by selecting the categories below: