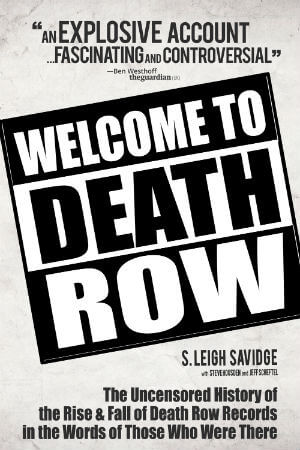 Welcome To Death Row: The Uncensored Oral History of Death Row Records in the Words of Those Who Were There
by S. Leigh Savidge

Read Our Review of Welcome To Death Row: The Uncensored Oral History of Death Row Records in the Words of Those Who Were There

“In the wake of Marion ‘Suge’ Knight’s move to rip the guts out of Ruthless Records and NWA, Death Row Records exploded on the music scene in 1993 with the ‘gangsta rap’ sound that had taken the world by storm. Yet, despite its unprecedented success with stars such as Dr. Dre, Snoop Dogg and Tupac Shakur, it quickly unraveled in a firestorm of rivalries, greed, violence and government scrutiny as Suge Knight’s unconventional business methods increasingly mirrored the violent, hard- edged themes of its music…

[This book] is the complete and untold story of the rise and fall of the notorious Death Row Records label, presented as an oral history through first-hand accounts… stories from over 60 former Death Row rappers, promoters, music executives, journalists, producers, managers, publicists, lawyers, and drug dealers all eyewitnesses to the label's phenomenal success, internal battles and violence, and its inevitable crash.

Interwoven with these histories is the story of how [the author] navigated a surreal world of Crips and Bloods, crooked lawyers and cocaine kingpins, [and] gangsta rappers and thuggish music executives… under the threat of retaliation.” —Excerpted from the Bookjacket

More books like Welcome To Death Row: The Uncensored Oral History of Death Row Records in the Words of Those Who Were There may be found by selecting the categories below: