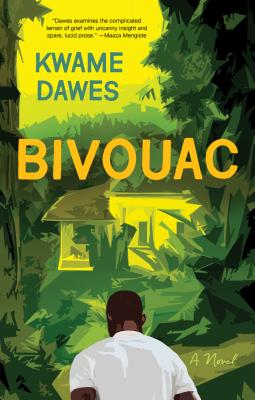 “Dawes examines the complicated terrain of grief with uncanny insight and spare, lucid prose. What unfolds is a story about a man, a family, and a country searching for answers and new hope.”
—Maaza Mengiste, author of Beneath the Lion’s Gaze“Bivouac speaks in tongues so that the reader hears both the market and the courtroom, the orchestra of ancestral voices and the tone of individual conscience. Kwame Dawes’s novel laughs and mourns, claps hands for the inventive communal spirit and wrings those same hands as a result of political malfeasance. I was thrilled to see the writer channel his father’s prose and summon pre-independence Jamaica. As readers we should celebrate Bivouac because of its celebration of Jamaica and, by extension, the Caribbean. The novel is replete with generational continuity and loyalty, from father to son, mother to child, the dead and the writer charged with the task of being custodian of their spirits.”
—Fred D’Aguiar, author of Feeding the Ghosts“Kwame Dawes brings the beauty and subtle rhythms of his poetic voice to this moving, dreamlike novel where the past intercedes on the present. A deep pleasure to read and savor.”
—Bernardine Evaristo, author of Mr. Loverman “Dawes’s novel is a poetic patchwork of waiting, of sliding into the past, casting into the future, but mostly of slow, sensorial limbo in the present…Dawes exercises significant stylistic restrain…so that his flourishes appear like musical interludes, culminating in a final explosion of style and imagination that overwhelms the initial questions the story raises.”
—Maple Tree Literary Supplement“Bivouac is Kwame Dawes’s dark novel about death, politics, family, and sex in a Jamaica that has a ’scarcely understood sense of temporariness and dislocation,’ with dialogue that puts you right onto the streets of Kingston."
—New West Indian Guide When Ferron Morgan’s father dies in suspicious circumstances, his trauma is exacerbated by the conflict within his family and his father’s friends over whether the death was the result of medical negligence or if it was a political assassination. Ferron has lived in awe of his father’s radical political endeavors but is forced to admit that, with the resurgence of the political right in the Caribbean in the 1980s, his father had lost faith, and was "already dead to everything that had meaning for him."Ferron’s response to the death is further complicated by guilt, particularly over his recent failure to protect his fiancée, Dolores, from a brutal rape. He begins, though, to investigate the direction of his life with great intensity, in particular to confront his instinct to keep moving on and running from trouble.This is a sharply focused portrayal of Jamaica at a tipping point in its recent past, in which the private grief and trauma condenses a whole society’s scarcely understood sense of temporariness and dislocation. For both Ferron and the society there has been the loss of "the corpse of one’s origins," and the novel points to the need to find a way back before there can be a movement forward.

Books similiar to Bivouac may be found in the categories below: