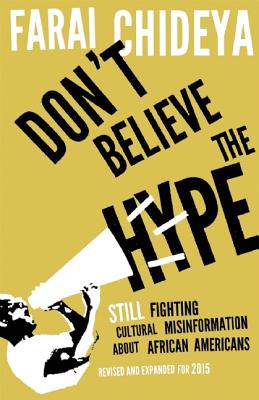 Book Description:First published in 1995, Farai Chideya’s Don’t Believe the Hype became an instant classic, filling an enormous gap in what was then an emergent field and going on to sell more than 50,000 copies. Chideya exposed the various ways that media bias created and upheld inaccurate and harmful stereotypes about African Americans, and she succeeded in debunking those myths with an accessible, thoroughly researched handbook, its title inspired by the famous Public Enemy song.Now, after achieving national fame as a respected commentator on NPR, CNN, and ABC News, Chideya returns to this seminal text, offering a completely revised and updated twentieth-anniversary edition. She once again exposes the persistent reality of media bias against black America, even as new media formats proliferate and diversity rises in newsrooms, on television, and in film. This new edition highlights biased news coverage of black athletes, disaster victims, and police violence, among other subjects, with updated statistical information offering accurate counterpoints. Now a new generation of readers can benefit from a fresh, frank approach to looking at race, media, power, and culture.

More books like Don’t Believe The Hype: Still Fighting Cultural Misinformation about African Americans may be found by selecting the categories below: