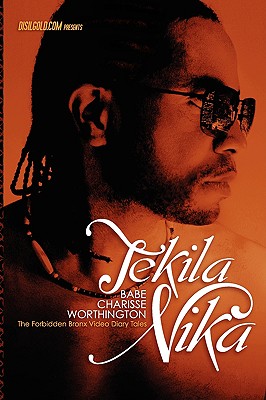 Paperback Description:
Who is the real Tekila Nika? They say there is a Tekila Nika in every "Bronx Bad Boy." The wait is over! The Queen of Murderotica Suspense, Babe Charisse Worthington, thriller pen name for Heather Covington, founder of Disilgold publishing, arrives with an original Psycho-thriller conceived in 2001 and covering a span of 6 years with cover design and art direction by Def Jam’s Robert Sims. The novel based on true aspects, is now unleashed to reveal the notorious and mysterious pact of men from the Bronx who roamed the valley, Edenwald, Baychester, Gunhill Road, Boston Road with a ring leader called Tekila Nika Jones, Jr. His crime…..he crossed 12 women from the Bronx who now have revenge on their minds. A prized journalist has only days left to uncover a deadly murder in a nightclub, but may find herself entangled in the dark world of womanizing men, dangerous night life and a serial killer on the loose. Will Babe, a prized journalist put her pen down in time before it’s too late and realize she is face-to-face with a murderer in the heart of the Bronx and on the loose? Get ready to lose your breath with a New Year’s Thriller that is SHOCKING! UNINHIBITED! DISTURBING! SEXY! RAW!- AS SEEN IN PUBLISHER’S WEEKLY- The book industry’s magazine! TEKILA NIKA IS A FORBIDDEN BRONX TALE THAT WILL LEAVE YOUR MOUTH AGAPE, and as told by Babe Charisse Worthington.

More books like Tekila Nika: The Forbidden Bronx Video Diary Tales may be found by selecting the categories below: