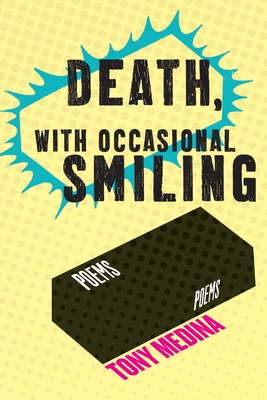 Read a Review of Death, With Occasional Smiling at Mosaic Magazine.

The electrifying body of poems in Tony Medina’s Death, With Occasional Smiling speaks with blood-soaked lips. The poet pulls us up from our knees, from the ashes of American history, imagination, and memory, so that we can listen to the clarions of what we must all face if we are ever to be free. Facing language and self at once, Medina’s intelligence, spirit, humor, and symphonic powers make language breathe in rhythms that resist bullets and blackface. These living poems are always-ever needed, as part of the threshing and reckoning we are burning down and rewriting in our time.—Rachel Eliza Griffiths

In this sweet revelation of a book, Tony Medina writes; “Racism is an heirloom passed down through / Generations like a retrovirus.” It just keeps ticking, doesn’t it? Sometimes, it’s a time bomb, sometimes, it’s an alarm clock. Sometimes it burns, sometimes it sings. Sometimes, you can can’t bear what it has to say, sometimes you can’t hold in your laugh. Bullet, guitar, truthful mirror. Here we are, and there you go. Death, With Occasional Smiling is that kind of joint. Isn’t that called genius? —Cornelius Eady

Tony Medina’s Death, With Occasional Smilingg is a beautiful and important book. It is full of odes and elegies for young black men who’ve been slain by police, racist vigilantes or succumbed otherwise to a violent America. The ode to Stephen Clark is breathtaking and Medina documents forcefully our collective loss. At the center of this book is a war against black bodies, told with a precision, meter, and urgency to compose an elegant poetic and necessary song. Medina’s use of Black and Latino vernacular, culture, music and cadence woven with sorrow, humor, blood, bone, and defiance is exciting and masterful. It captures not only our woe but the gleaming brilliance of survival. —Pamela Sneed

More books like Death, With Occasional Smiling may be found by selecting the categories below: