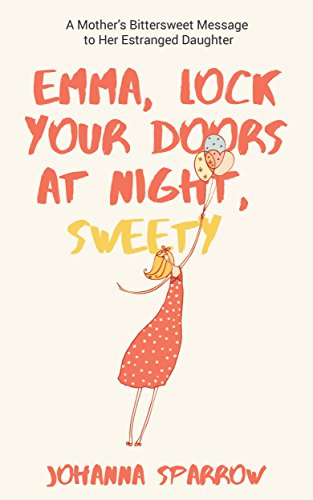 EMMA, LOCK YOUR DOORS AT NIGHT, SWEETY: A Mother’s Bittersweet Message to Her Estranged Daughter
by Johanna Sparrow

If you’re a mother raising a daughter, you know how difficult things can become seemingly overnight. Holding on too tight or not tight enough can make for one tense rollercoaster ride that can be fatal in maintaining a healthy relationship.

Such was the story of Emma and her mother’s relationship that, over time, ceased to exist, but only in her mother’s thoughts. Questioning if there was love on both sides and what could’ve been done to save their relationship is a burden that Emma’s mother now carries.

Emma’s gone, and she’s not talking. Who can imagine never seeing their child again and living with the regret of not doing enough to salvage their relationship?

In a desperate, last-minute attempt to save their relationship, if not her sanity, Emma’s mother penned an open, ten-page letter that exposed her broken heart to her daughter, in hopes that she’d return home. She went from acceptance to blaming Emma for their relationship not working, and that meant she was finally releasing everything to God.

The end had come, and it was time for her to finally face the truth—Emma was gone and keeping Emma in her heart was all she had left of their relationship. Making peace with that is the only way she could truly move on. Hoping Emma would one day see her letter and know it was written from the heart was all she wanted.

Emma knew her mother was afraid that she’d move away from home one day, and her mother would always tell her, “Lock your doors at night, sweety.” That’s what she titled her letter, which turned out to be a final goodbye and bittersweet ending to a relationship that never had closure.