Book Review: Daughters Of Men: Portraits Of African-American Women And Their Fathers 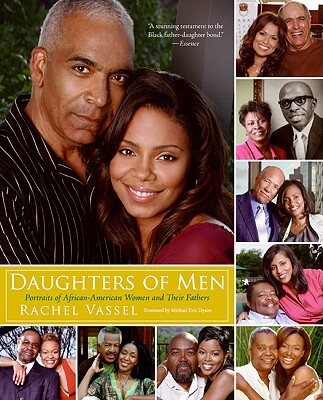 Read a Description of Daughters Of Men: Portraits Of African-American Women And Their Fathers

’Good black fathers are far more plentiful than either the media or warped social science would have us believe’ The moral beauty of a black father's determined embrace of his female offspring pays off in startling dividends.

The book you hold in your hand is a portable testimonial to the majestic grip of black father love. In the stories of women whose names appear in lights and those whose lives are lit by the sweet joy of their father's quiet heroism, you’ll trace the elegant and unmistakable influence of black men on the daughters they have reared.

To be sure, bringing up their daughters was a labor of love; this book is a small gesture of gratitude for the mighty task of shaping the souls of sisters who sail beyond narrow horizons and artificial limits.’
’Excerpted from the Foreword by Dr. Michael Eric Dyson (pages xv-xvi)

For what the 44 contributors to this touching collection of intimate memoirs had in common was the sage counsel and unwavering support of a strong dad. Thus, it only makes sense that each of the heartfelt entries in this beautifully-photographed keepsake would invariably reflect the perspective of a daughter grateful for the father figure who helped forge her character during her formative years.

Credit the ostensibly very-well connected Rachel Vassel for talking an enviable assemblage of rich, powerful and famous sisters into participating in the project. Many are household names, such as Beyonc’ and Solange Knowles, actresses Sanaa Lathan, Meagan Good, Nicole Ari Parker-Kodjoe and Aisha Tyler, entertainment magnates Cathy Hughes, Tracey Edmonds and Sheila Johnson, national TV news correspondents Deborah Roberts and Rene Syler and Gospel great Yolanda Adams. Others, like Amsterdam News publisher Elinor Tatum and Harlem's Studio Museum curator Thelma Golden, have made equally-impressive marks in their own right by rising to the top of their respective industries.

And exactly how were these accomplished women inspired by their dads? Typical in tone are the warm reflections of Ms. Golden, who fondly reminisces that ’I was always interested in the arts, and my father was the first one to take me to see the Dance Theater of Harlem and Alvin Ailey.’ Adding that, ’What he did for me, which was such a gift, was encourage my own ambitions by supporting them.’

Thelma and her dad, Arthur, are artistically posed standing back-to-back in their accompanying portrait, while most of the other father-daughter pairs are shown simply hugging each other contentedly in pictures which say a thousand words. In the cases where a dad was unfortunately deceased, the subject was shot next to a photo of her dearly departed.

An illustrated album of testimonials which add up to proof positive that the sky's the limit for any African-American girl able to rely on the undying love of a father.

Read Amistad’s description of Daughters Of Men: Portraits Of African-American Women And Their Fathers.