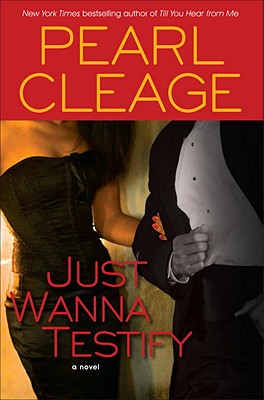 Read a Description of Just Wanna Testify: A Novel

Just Wanna Testify by the mega-talented author, Pearl Cleage was met with mixed reviews when it was first released. Many of my “book buddies” told me that I wouldn’t like it at all. Everyone knows that I don’t do paranormal. Ever-popular werewolf and vampire stories just don’t do it for me. So, for a long time this book sat on my book shelf. Well everybody was wrong. This novel was an incredible reading journey for me. I wish I had read it sooner.

Being a lover of all books Pearl Cleage, I could not fathom a story about vampires. What was Pearl thinking, I thought. But then I thought but how could I go wrong with a story about one of my all-time favorite characters, Blue Hamilton? Fans of this author know very well her books set in Atlanta’s West End, a favorite setting of mine. Blue’s love for his wife, Regina Hamilton tugged at my heart from the very beginning. So how in the world do vampires fit into this scheme of things?

In her second trimester with their second child, Regina and Blue were returning from a date night in the West End and noticed that the moon was rising in the sky like a giant yellow ball. Very much the mystical and spiritual character that Cleage had created several books ago, she was intrigued by the sighting. Atlanta’s West End District has always been home to very unique cast of characters. Still, the supernatural was not something one would expect in the neighborhood of African American artists, thinkers and doers…folks who loved to call the East End their home.

But lately, there had been sightings of a group of tall, beautiful, very slender, almost anorexic women dressed in skin-tight black leather pants, thigh high boots and bright red lipstick. Supposedly these sisters were the Too Fine Five, a group of international supermodels who were in town for an Essence magazine photo shoot.

In due time, Blue would be paid a visit by Serena Mayflower, the oldest sister and leader of the pack because everyone knows you don’t venture into the West End without the blessings of Blue Hamilton, unofficial mayor and protector of this unique community of Black Folks. These women were dubbed “the vampire women” who drank bloody marys instead of blood, yet still had an air of evil-doing in their spirit. They proclaimed that they were vampires…

Legend had it that these sisters were from an area outside of New Orleans where their family had lived for several generations. After Katrina, they moved to a private island provided by a friend where they could rebuild their lives unnoticed by the rest of the world. Their numbers were dwindling because they could no longer find suitable men to mate with and multiply. The story was that many, many years ago, during the day of Marie Laveau there was a family of seven beautiful sisters. The women in this family, had been used and abused by the men that they married. The mother herself, had been beaten and tormented by the father for years before he finally ran off.

As her little girls grew older, Madam Mayweather was determined that her daughters did not suffer as she did when she fell in love with their father so she had Madam Laveau mix a special potion to be given to her daughters to protect them from the charms of unscrupulous men. The Fine Five were descendants of those daughters.

Regina’s friend and neighbor, Aretha Hargrove is the artistic photographer hired for the Essence shoot and Regina was working as her last minute agent who procured the highly lucrative assignment for Aretha. The shoot was scheduled to held at the campus of Morehouse College. There was something sinister in the air at this shoot that both Regina and Aretha felt; yet could not rightfully describe or define.

Something was amiss and Blue Hamilton was sure to find out Serena Mayflower’s hidden agenda and how it related to the people of Atlanta’s West End. You will never guess what takes place in this story.

Returning in this novel is Blue’s Aunt Abbie and her husband Peachy who lived in a beach house on Tybee Island and operate a very successful restaurant on the island. Peachy is a “colleague” of Blue Hamilton.

Now that I’ve given you the back story to Just Wanna Testify, it’s your choice to delve into one of the author’s most unusual storylines. Cleage, once again shows how the mighty power of love will endure time after time and at the end of the day will take you higher and higher. I just loved this story and the familiar characters from the West End. You will too.

Read One World/Ballantine’s description of Just Wanna Testify: A Novel.