Book Review: Red at the Bone 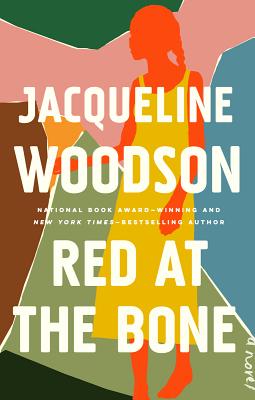 Read a Description of Red at the Bone

Jacqueline Woodson is the best-selling author of more than two dozen award-winning books, including the 2016 New Times best-selling National Book Award finalist for adult fiction, Another Brooklyn. Her recent novel, Red at the Bone is a sensitively told story of two families whose lives become interconnected through the unexpected birth of Melody. Using autobiography, history and her reflections on identity, loss, and death, Woodson weaves a story that reflects the characters’ search for love and their need for connectedness and healing.

Melody comes from a strong Black family whose lives span several generations. Her family’s collective memory and cultural history are rooted in Tulsa, Oklahoma, Atlanta Georgia, Chicago, Illinois and early 20th century Brooklyn. Iris, Melody’s mother, becomes pregnant at 16. The family of Aubrey, Melody’s father, is not as rooted. Aubrey, the son of a White mother and Black father, meets his father, a jazz musician, but does not really comes to know him. He and his mother never stay in one place for too long. Like his father, Aubrey and his mother continuously move, staying along the coastline and close to the water.

The novel opens with Melody describing the band that is playing at her cotillion as she descends down the stairs in the Bedford Stuyvesant brownstone of her grandparents. Wearing the dress that had been unworn by her mother 16 years ago, Melody reflects on the significance of that day. Her mother, Iris never had her cotillion for she had been pregnant with Melody, thus breaking her mother’s dream that included the legacy of participating in a cotillion and pledging to a sorority. Melody, has become her grandmother’s hope in carrying forth that legacy. As a young girl who has the cotillion in a house with a hundred plus years of history, Melody symbolizes the past, present and future.

As evident in her poetic memoir, Brown Girl Dreaming, Woodson is a poet as well as a novelist. Her prose in ,Red at the Bone, is poetic with bold, strong and richly textured images. She draws the reader in by using techniques such as the stream of consciousness, flashbacks and markers in music, literature, popular culture and history. As Iris recounts her college life at Oberlin, a college in Ohio whose founders were abolitionists, she recalls bell hooks, LL Cool J and A Tribe Called Quest. While reflecting on her teenage years, she reminisces about George Orwell’s 1984, Kool and the Gang, Tina Turner, Michael Jackson’s “Thriller” and the Ghostbusters. Melody, on the other hand, provides cultural markers representative of her days at a county day school. Her white peers assume that she must be part of Prep for Prep or the ABC program that offers students of color an opportunity to attend private school. Melody recounts how she and her Black classmates sit at the together in the cafeteria and play Tupac loud, blast Jaz-Z, Snoop Dogg, and Outcast.

Sabe, Iris’s father, symbolizes the collective historical memory of racial relations in the United States. He reminds Iris of the Black Wall Street race riot and massacre of Blacks in the city of Greenwood located in Tulsa, Oklahoma. Sabe notes:

Those Tulsa white folks burned my grandmama’s beauty shop to the ground! … They nearly burned my own mama, who carried a heart-shaped scar on the side of her face till the day they laid her in the ground. Imagine them trying to set a two-year-old child on fire.” … Those white folks tried to kill every living brown body in all of Greenwood, my own mama included. (Woodson 80)

Sabe continues by emphasizing to Iris, the importance of remembering.

Read Riverhead Books’s description of Red at the Bone.