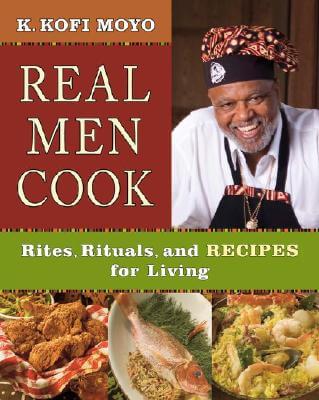 Read a Description of Real Men Cook: Rites, Rituals, and Recipes for Living

"Increasingly, African-American men in particular are often portrayed as criminals, drug addicts, absentee fathers, and jailbirds.  Seldom are they depicted as defenders, providers, helpmates and companions. This picture is flawed. It fails to recognize the millions of everyday men who strive constantly to make their world, and the world at large, a better place.

That's part of why I, with my wife, Yvette, founded Real Men Cook. It is a crusade to build families and celebrate the Real Men who are often overlooked for their great deeds, mentoring, coaching, and doing their best against the odds of urban life. The Real Man is a man who loves his family, adores his children, enthrones the women in his life, and cherishes his friends.

Some might ask why we chose something like cooking. W.E.B. DuBois once said, 'The Negro race, like all others, is going to be saved by its exceptional men.' It is my belief that we are more likely to find that salvation over a plate of tantalizing food, cuisine that feeds our bodies, souls, spirits, and communities with a nutritional value that can neither be underestimated nor accurately measured."

’ Excerpted from the Introduction

On Father's Day 1989, Yvette and Karega Kofi Moyo, parents of nine, invited neighborhood families to gather at their home in Chicago for a pot luck feast in order to shed light on some unsung heroes of the community, namely, all the ordinary, hard-working men who cared for their loved ones 365 days a year. Over the intervening decade and a half, that local event blossomed nationwide into an annual affair which simultaneously raises money for a variety of worthy charities like the YMCA and the the Boys and Girls Clubs of America.

Now, just in time for Father's Day, Kofi and company have published Real Men Cook, a smorgasbord of recipes created by unsung heroes not only from the Windy City, but from African-American neighborhoods all over the country. But as important as the succulent treats featured in this coffee table book's glossy, full-page photos are the corresponding tributes to the chefs shown sharing their culinary secrets.

For each of these role models, whether previously known or unknown, has made a significant, continuing contribution to his extended family and community. And Real Men Cook offers the world an opportunity to meet over 100 of these gentle giants while savoring their mouth-watering dishes. And you can even meet some of the authors and others in person on Father's Day, June 19th, when Real Men Charities, an umbrella organization, will sponsor a series of charity cooking events from 3 till 6 PM in the following cities: Miami, Houston, Dallas, Detroit, Atlanta, L.A., New York, Philadelphia, D.C., and, of course, Chicago.

Now I can't personally vouch for any of these great-looking masterpieces, not having actually attempted to follow the instructions and whip any of them up . But that's really besides the point, isn't it, when it's all for such a noble cause.