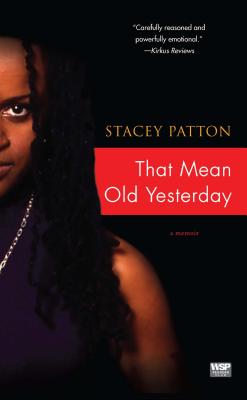 Read a Description of That Mean Old Yesterday: A Memoir

Paint a picture of a little brown girl who walks in fear and sadness.  Her dark story is told in Stacey Patton’s memoir, That Mean Old Yesterday.  Stacey was a ward of the State of New Jersey since she was a baby.  She lived in less than perfect foster homes until she was five and was adopted by a childless couple who lived in the suburbs of Trenton.  Here is where the horror story of abuse and degradation began.

Educated in Catholic schools and reared in the Holiness Church by her tyrant of a mother, Myrtle and her docile father, George.Stacey was considered one of the lucky ones to have left foster care and be adopted.  Myrtle and George were Southern people and George was a part-time minister. They believed that children were meant to be seen and not heard and if Stacey crossed the line, she was severely punished.  Although she was a good student she never could please her adoptive mother.  Myrtle was Stacey's Master and she walked on eggshells every day of her life in that house of fear.  The nuns at the Catholic school ignored her bruises and ’accidents.’ They also ignored the sadness in her eyes and the fear that set her apart from the other children.

One day when she had more than she could take, Stacey ran away from home.  After twelve years of waiting for someone, anyone, to come save her, Stacey bolted and walked out of that Myrtle’s  house with freedom on her mind.

The author uses the experience of slavery to compare her life to while in Myrtle and George's care.  So the book becomes more than just a memoir, it becomes  >also a lesson in African American history and the story of people of color as slaves in America.  Patton believes that when African Americans whip their children they do not understand the historical roots of the practice and its negative impact on African American children's development.

Finally, finding a safe haven at the police station; her abuse became apparent to the police officers and the state welfare system>.   She was given a choice to either return to her abusive adoptive parents or to become a ward of the state again and be placed in a group home.  Patton choose the group home. The restoration of her life began to take place based on her indomitable spirit and her refusal to give up.  She turned the tables on the system and earned a full scholarship to a prestigious private prep school. She was determined to be prepared to enter an Ivy League college upon graduation. Despite being discouraged by the staff at the group home and her therapist; Stacey pushed on and continued to be a gifted student excelling in both academics and athletics.  Stacey Patton focused on healing, forgiveness and forging an identity of her own.

What she has written in That Mean Old Yesterday is a story rife of life's disappointments of tragic proportions; yet she emerges triumphant.  She wins her fight to become whole.  Now a Ph.D. candidate at Rutgers University and an award winning journalist, Stacey's story is told in an effort to encourage us to carefully consider our treatment of our children and our history as slaves in America.  This book will open your eyes to the realities of child abuse in even the most prestigious African American communities.