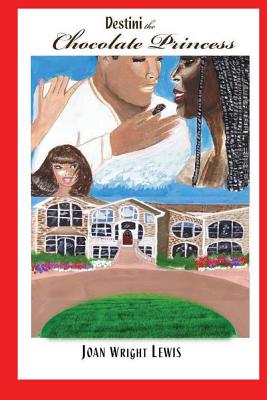 Read a Description of Destini the Chocolate Princess

Joan Wright Lewis’ novel, Destini the Chocolate Princess, reveals a terrible affliction in our community; the degree of self-loathing based on skin color. At a time when dark skin is still held in low-esteem—in both White and Black America—her plot effectively tackles this theme in the midst of the racial turmoil caused by the tragic death of Minnesota native George Floyd, who was killed by a police officer. After the incident a White person was overheard saying, “Probably he was killed because he was so big, so dark, and ugly.”

When the novel opens, Destini is born on a spring night. When Mary, sees her baby girl she is alarmed by her dusky appearance and remarks, “Goodness, she’s so dark and ugly.” She then adds that dark skin wouldn’t be so bad if the baby was a boy, but a girl… Flash to seven years later, when Destini and her cousin Crystal, are playing. Destini is jealous of Crystal’s delicate facial features and light complexion, which everyone thinks is attractive.

In many respects, Lewis’ novel recalls Toni Morrison’s The Bluest Eye. Both books explore, kinship, inner strength, and a resistance to giving in to self-pity and confusion. The emotional impact of cultural beauty standards and White privilege, which affects so many in our African American community, also links the main characters in both novels. Morrison’s Pecola Breedlove and Destini are cut from the same cloth, with Destini’s futile wish of a divine transformation from her ebony skin and Pecola’s obsession with child star Shirley Temple and her blue eyes.

In Lewis’ book, Destini must deal with heartbreak and trauma when her parents die in a plane crash. She is consumed by grief over the loss of her beloved father and loses weight. To make things worse, she is teased and bullied at school where she is called ugly duckling, tar baby and darkie. Three years later, Destini is burdened with another great loss, her beloved Grandma Harris has died. With no one to care for her, she is sent to an orphanage and then to a series of foster homes where she is scolded and abused if she makes one false step.

Destini is eventually adopted by the Taylors. Destini loves Mr. Taylor and his supportive wife Etta, who values effort and confidence. Destini is enrolled in Christian Middle School and then attends a religious academy where she meets Stephan Barronton, a rich, popular boy who has “an ivory complexion” and comes from a “good family.” Stephan likes Destini, but his sister, Shadae, doesn’t. Lewis expertly shows how vital parenthood can be when Etta comforts and coaxes her young daughter out of her alienation and hopelessness. “It’s great to look good on the outside, but what really counts is what’s happening on the inside,” she tells her. “Develop your inner self and it will reflect who you really are on the outside, and that’s more important.”

The author finds her stride when Destini is living with the Taylors, steering her away from the often faulty narratives of Black experience and the old notion that the only option during hard times is to suffer. At home, the concept of victimization, self-loathing, and negative self-image are dismissed when Etta tells Destini that she will get dance and voice lessons and enter into beauty pageants. For the first time Destini’s appearance is affirmed and not demeaned. However, in school, she is still teased and bullied because of her dark skin.

As Destini and Stephan’s relationship heats up, resistance comes from his family, especially his mother, Sophia. When Stephan invites Destini home, she tells him that Destini wants to trap him, and that he doesn’t realize the kind of girl she is. Sophia then tells Destini, “You are black, ill-bred and baboon ugly.”… “And if I were you, I’d stick to my own kind.” Shamed, Destini leaves but is pursued by Stephan, who wins her over with his charm and his pet name for her, “Chocolate.” Still, Destini knows her parents will not let her have a steady beau until she graduates.

There are several powerful moments between Etta and Sophia over their kids’ budding romance. When Sophia calls Destini “black, sneaky and untrained,” Etta ends the argument by informing Sophia that her daughter, Shadae, is pregnant. Embarrassed, the Barrontons send Shadae to Sweden to have her baby, with Stephan accompanying her.

Months later when the baby is born and Shadae returns home, fate enters Destini’s life one snowy night, when she notices skid marks and a car crash. Shadae and her mother are both seriously injured and her baby has been thrown from the car. Destini preforms CPR on Sophia until help arrives, but Shadae is in a coma, and her child later dies. It is this crucial moment that shapes Destini’s future, as well as the promise of any redemption or healing for all concerned.

In these critical times, African-American writers must tackle some of the most prickly issues both within and without our community. Lewis does this beautifully in Destini the Chocolate Princess. While others seek stylish techniques and complex solutions to our dilemmas, she makes her case by simply rebuking the notion that White skin equals value and worth.

In Lewis’ Destini the Chocolate Princess, being Black isn’t a crime, but often it’s a moment-to-moment struggle to exist. Cloaked in a Christian experience, she wrestles with the reality of being secular or religious in all things. For the most part, she succeeds, but at its core, this is a love story for young folks.