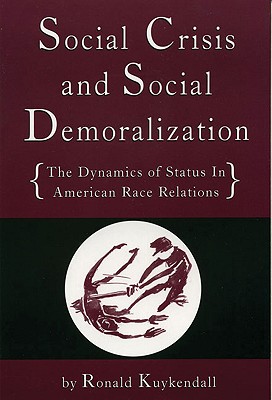 Read a Description of Social Crisis and Social Demoralization: The Dynamics of Status in American Race Relations

’American race relations are closely tied up with social status. Race relations' reflect the economic and social forces that are responsible for their development. What appears as distorted, pathological behaviors and thoughts among African-Americans is actually due to the fact that African-Americans are marginalized within American society and generally suppressed by racial discrimination at the bottom of the social status gradient.

As a result, the position of African-Americans in American life has made it difficult and laborious for African-Americans to overcome the many disadvantages and barriers to social, economic, and political advancement’ Mentally debilitated by their predicament, African-Americans are overwhelmed by emotion and stress, which severely retard their social functioning. With shattered morale and shaken confidence, the African-American is given over to random, inconsistent, irrelevant, and irresponsible behavior.’

But American political democracy is a sham when viewed through the lens of race relations. Liberty is bogus when scrutinized through the African-American experience, and opportunity is a delusion when professed under conditions of racial prejudice, discrimination, and oppression.

Because race relations are status relations, it is a difficult and complicated problem of power. The exercise of power reflects the interests of the dominant class. Therefore, a counter-class, the antithesis of the dominant political class, is necessarily the only vehicle by which right can be restored. This can only be accomplished by awakening consciousness among that segment of African-American intelligentsia that is objectively situated outside of the social restraints and who comprehend the socio-political situation in its totality."
—Excerpted from Conclusion

Eleven years ago, when he wrote The Rage of a Privileged Class, Ellis uncovered a little-known social phenomenon, namely, the widespread anger and psychic pain being experienced by many of the best-educated African-Americans, despite their being well-respected and relatively prosperous, at least in comparison to the rest of the black community. His seminal best seller exposed the diminished dreams of a seemingly successful set of overachievers who he found to be bitterly disappointed about the racial discrimination they had encountered, especially in terms of careers at the corporate level. Rather uniformly, they reported feeling betrayed by the country's conventional wisdom that ’To get a good job, get a good education,’ as they found themselves still judged by skin color instead of the content of their character.

Demoralization: The Dynamics of Status in American Race Relations. For Kuykendall, a Professor of Political Science at Greenville Technical College in South Carolina, argues that the United States' body politic, as currently constructed, is perfectly comfortable with black people being ostensibly relegated to a permanent, second-class status.

The author blames deep-rooted bigotry for the malingering complacency about the plight of African-Americans in this country, contending that they emanate from a trio of unfortunate beliefs about blacks' (1) biological inferiority, (2) cultural dysfunction, and (3) inability to figure out how to overcome the stigma of slavery. Despite the seemingly intractable state of affairs, Kuykendall has hope, and it rests with the aforementioned, disillusioned class of disaffected, African-Americans eggheads.

Building a brilliant case with copious quotes from Harold Cruse (The Crisis of the Negro Intellectual), Frantz Fanon (The Wretched of the Earth), E. Franklin Frazier (Black Bourgeoisie), Carter Woodson (The Mis-Education of the Negro) and a dizzying number of other esteemed thinkers, again and again the book arrives at the idea that the great masses of poor blacks are simply so utterly oppressed that it's impossible for them to ascertain the extent to which they have been bamboozled to believe in an unattainable American Dream.

So, Kuykendall, ala WEB DuBois’ Talented Tenth, calls upon the exceptional among the black intelligentsia to forge a new political mindset. The revolutionary ideology he proposes is to be organized along class lines, and appears to stop just short of advocating armed struggle. This contemplated reform apparently relies heavily on bourgy blacks agreeing that they have been denied meaningful participation in this society.

While Social Crisis and Social Demoralization is undoubtedly one of the better-informed examinations of the subject of so-called race relations written in recent years, time will only tell whether or not the comfy class of African-Americans will heed the author's incendiary call to challenge the status quo.

Interview with the Author of Social Crisis and Social Demoralization by Kam Williams
http://aalbc.com/authors/ronald_kuykendall.htm

Read To Be Determined’s description of Social Crisis and Social Demoralization: The Dynamics of Status in American Race Relations.