Book Review: Likeness of Being 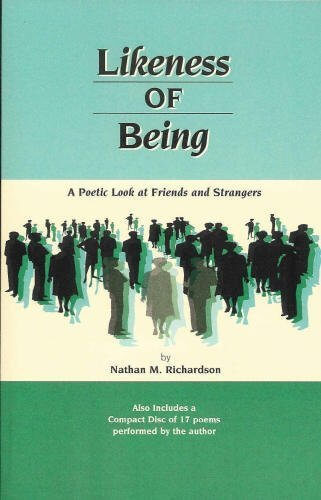 Read a Description of Likeness of Being

In Likeness of Being: A Poetic Look at Friends and Strangers, poet Nathan M. Richardson offers readers an invitation to his soulful, Southern roots. Full of verbal word play and heavy signifyin’, Likeness of Being is not only imbued with several, contemplative poems that heighten the reader's consciousness, but also skillfully laced with inspiring images from the poet's past. Richardson reveres such things as the importance of family, tradition, and community, as well as the immaculate wonder of nature, spirituality, and God in his deft poetry. Even the sweet smell of magnolia trees are illuminated in Richardson's ’jazzy’ collection.

In ’Eulogy of a Modern Day Tribal Chief,’ Richardson pays tribute to a legendary figure in his own family, a historic, inspiring man with a warrior-like spirit whose roots are so deep that they have been retained by succeeding generations. Richardson writes:

Not a Zulu in head-dress, pierced ear, or painted eye
but a Holliman, a chief with a hundred and one neckties
Not a Pygmy, with an idol god and a slew of wives
but a Christian with one God and one Christian bride
They carved out together a totem pole
that grew three generations tall before they were old

Richardson's poem to a ’Modern Day Tribal Chief’ is symbolic because it eulogizes many righteous elders in our own community, who have sacrificed for family while, at the same time, struggling to retain rich, African values; a fierce spirit of resistance; and a notable integrity. Modern day tribal chiefs, like Richardson's own, are truly Oba's (the word ’oba’ means ’king’ in Swahili) who all people can emulate and look up to, especially when such things like infidelity, divorce, or a lack of family, spiritual, and traditional values threaten to plague our communities.

Other images’like the joy that overwhelms a father who attends his child's first graduation, or that happiness that exudes from both a husband and wife, as they treat their children to sounds of African drums at a festive, colorful parade’are interspersed through this collection.

Richardson, however, proves his skill at writing meaningful poems for both the family and the larger, world community. A 22 year veteran of the military, Richardson knows, first-hand, the ironies of war. As he writes in ’The Glory of War’:

Richardson poignantly captures the feelings of men on both sides of a war. As with his poem, ’Weapons of Mass Destruction,’ Richardson, in ’The Glory of War,’ proves that there are two sides to every story; that even men who are ’pulled into merciless glory’ know that pain also lies at the heart of ’so-called victory.’ These human beings may suffer what W.E.B. DuBois calls ’double-consciousness' because at the seat of their new-found ’glory’ also lies heartache, discontent, death, destruction, and despair.

Perhaps what makes Likeness of Being so intriguing is its diversity of content. Ripe for young students, college graduates, families, and seniors, Richardson's book offers hope to humanity. Likeness of Being encourages all of us to walk righteously and peacefully. As he writes in ’The View from the Black Forest’:

We must stand together, but not as a clan and not in a panther's den
But as a race of people seeking to influence through involvement

Readers will not be discouraged when reading Richardson's book of poetry. One added feature to this inspiring collection is the compilation CD, featuring Richardson reading all of his poems. The CD is included at the end of his book. Listening to the poet read his soulful poems causes one to re-member the notable voices of other poets like Claude McKay and Langston Hughes, who preceded Richardson.

Likeness of Being is truly a wonderful collection.

’’’’’’’’’’’’’’
Dr. Jamie Walker is a journalist and poet. Her most recent poetry collection is called Signifyin’ Me: New and Selected Poems.

Read To Be Determined’s description of Likeness of Being.