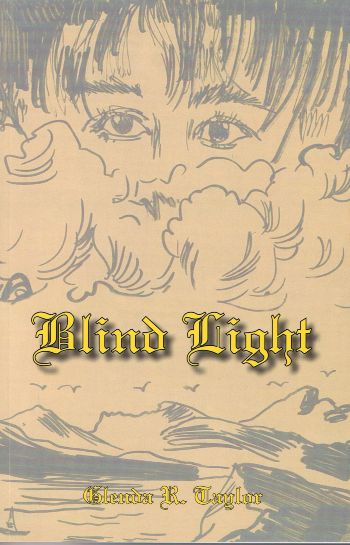 In 2001, visionary social justice advocate, Glenda R. Taylor was struck with a potentially devastating illness that took most of her sight. Instead of retreating from the public, she used it as a time of reflection and investigation. In Blind Light she asks the questions: What happens when one loses her vision in the midst of a successful career? What does the mind experience and how does it then translate reality? Her collection of poems tries to answer these questions.

In her Preface, award-winning author and literary critic, Elizabeth Nunez writes that “Blind Light is a brilliant and compelling work… a deeply spiritual journey that allows the reader entry into the world of quantum physics, where Truth illuminates reality.”

Taylor writes in the Introduction about the spark for her poetry collection. “I have always refused to be shackled by the alleged limitations of race and gender; but, the inherent bondage of blindness was a manacle I could not ignore, a fetter I could not circumvent. Many expected me to step into the inferno of darkness…

And then, there was me, the motivator; the one who believed in impossibilities; the one who freely spoke and wrote about overcoming obstacles; the one who was trying to understand the message, learn the lesson while walking through a maze of burnt shadows of the past.”

Taylor refused to feel powerless, she refused to be reduced by the loss of her sight. Instead she chose to find a blind light, a new way of seeing and experiencing the world.

“…And then, there was blind light, a knowing, a waterfall, from which I drank, unwillingly baptized by invisible forces that had molded a destiny over which I wanted control.

Blind Light is the result of seven years of residing behind the wall of invisibility. It unveils a portrait of what it is to live in a world/whirl that recognizes your physical body; but cannot understand the reality that you now face, the language that you must now interpret in order to survive in terrain that is both foreign and discomforting….”

I look at my hand
with consciousness
and see no form
It is invisible
It is not there
It does not exist
Do I exist?

The poem ends with the words,

Taylor’s free verse poems are confessional, they examine her life and experiences in the same calm questioning tone and rhythm. She is relating her experience of losing her sight while also asking the questions: How is that loss supported by our other senses? Can we access the sixth sense? How do we then “view” the world once we lose our sight? The poems have two, three, four, five and six-line stanzas, some rhyming some not, as well as poetic narrative. Our senses, nature, acceptance, and the metaphysical, are consistent themes and are used to reference science, spirituality, our senses and their function.

The poem “Vision” references great men of history who lost their sight. Acclaimed poet John Milton, Leonhard Euler, who is recognized as the greatest mathematician of all time, and Paul the Apostle. These brilliant men lost their sight but this loss helped them gain their vision. “Vision” asks the question; if they had not lost their sight would they have gained their knowledge of the metaphysical—because they had to find a new way to see the world?

shared the fruits
of their sojourn

From which tree
in the garden
was it then?

Was their vision
an exchange
for their sight?

Because she was sighted most of her life, Taylor is able to take the reader on a thoughtful, meditative, and insightful journey to understand the role our senses play in our life and our world, and how they can help to translate it for us, should we lose one of them. Her poems are accessible, and uncomplicated, though not linguistically far-reaching or dexterous, they are mentally stimulating and spiritually electrifying because they introduce a fascinating concept. By raising philosophical and metaphysical questions that challenge our perception of reality they give insight into the world beyond the physical.

Blind Light is a deeply spiritual journey, that is at once empowering enlightening and hopeful.