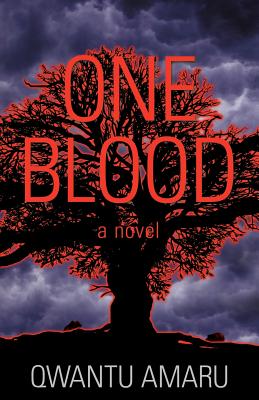 Read a Description of One Blood

No matter the genre, a good story should grab and not turn you loose until you’ve consumed all the elements of great narrative and expository writing.  It’s this mindset that delivers the timely peaks and valleys that helps to embellish writing to mass audience appeal.

Author Qwantu Amaru with his good story, ONE BLOOD, fits this billing with accolades.  Mr. Amaru dispelled all notions of failure by giving us a fine novel that merited mention with others considered superlative. The cliche "for every action there’s a reaction" runs true to form in depicting the plot, the myriad of subplots, unique settings and characters developed to fit the makeup of how each interact with each other.

The story is set around a somewhat dysfunctional family during the time period 1802 to2002 in Louisiana. Within that time frame family members are unaware of hidden connections between each other, and the saga takes off. It opens with a preamble of dirty laundry linked to a blood curse that have shaped the life of Louisiana's most powerful man, Governor Randy LaFitte, politically and otherwise. It’s one thing to dig up a family curse from slavery to kill your own father, but can it be the genesis of more subsequent angst?

The curse is the epitome of this story and the genesis of the lives this man's rigid actions have harmed, destroyed, or even helped in a few cases. It reverberates with retribution and redemption, complete with with cops who want to do the right thing; cops who don’t; politicians with their own agendas; preachers, prisoners, ghastly tales and demonic emanations real or imagined to those who are affected accordingly. It also deals with ideas about the danger of misguided belief, overcoming the nemesis of the past, and reclaiming lost innocence. Randy LaFitte desperately wanted to do this and believe that cause and effect should have been presented with different sets of circumstances in lieu of the curse.

I can’t say enough about the characters and the actions, issues and mannerisms that shaped them: Lincoln Baker, a central and enigmatic person who possibly could be misunderstood and central to the whole story. He was adopted by Moses Mouton who took him in until the events of the Simmons Park Massacre...his guilt leads him back to his old friend Malcolm Wright and the Louisiana State Penitentiary where vodun was commonplace; Amir, who lends more to his presence than mere happenstance; Snake, the name implies accordingly. He does all the dirty work for the Governor and possesses a natural affinity for sinister behavior; and there are other minor and major characters that make up the better part of the whole. More questions abound, though. Who kidnapped Randy’s daughter, Karen and why? Is revenge enough to justify vengeance? What part did a particular Madam Devereaux play in the mix...how much does she know in the scheme of things, and what other secrets illuminates the curse that’s sealed in the blood?

All of these elements are achieved without muddling the action or slowing down the plot. The author’s narrative style balanced a nostalgic approach while not allowing the story to depreciate with each flashback to yesteryear. I felt it gave readers a chance not to predict any subsequent development. Forge all of these together with the dramatic settings and you get page-turning delight hard to put down -- a story engaged in high pressure situations, innuendo and intrigue.

Although I loved this book and found it most engaging, I found the timelines at the beginning of each chapter could, perhaps, have been segued as virtual content within the context of the narrative to achieve better continuity. I also feel too, that exposition should be woven in more gradually.

Nevertheless, there’s much more I can tell you about this fine novel, but you’re going to have to buy this book and find out for yourselves! I give 5 out of 5 stars for this superb supernatural thriller. As for the author, undoubtedly where indelible ink flows, so does subsequent stories destined from this talented writer. I, like many others who have read this book will share the opinion that a star has made it where he belongs!

Read The Pantheon Collective (TPC)’s description of One Blood.