Book Review: The Wake Up Call: Financial Inspiration Learned from 4:44 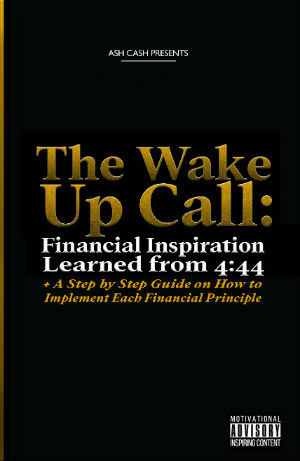 Read a Description of The Wake Up Call: Financial Inspiration Learned from 4:44

With a focus on the young at heart, personal finance expert Ash Exantus aka Ash Cash employs the themes of master rapper-businessman Jay Z’s classic album, 4:44, to explain the rules of financial freedom. He is to be commended for the excellent concept in this slender publication, for as Black Enterprise Magazine once noted African American youth mostly spend and rarely save or invest. In Wake Up Call, Mr. Cash informs the reader that the Brooklyn-born entertainer-record producer Shawn Corey Carter aka Jay Z has cracked the code to make money and such information should be available to the masses.

Mr. Cash cherry-picks Jay Z’s observation about poverty and what the state of financial lack does to a person: the feeling of poverty makes one feel embarrassed every day and that anybody would do anything to ease that feeling. The author notes American blacks spend about $2 trillion a year but own very little. Like Trump once said, money is power during the presidential campaign. The president should have added, like Mr. Cash does, no one respects a beggar, instead Trump said the now-famous line: “What does you have to lose?&dsquo

In Mr. Cash’s definition of racism, like that of Marcus Garvey and Malcolm X, he shows that there is a class tyranny, rich over poor, sustained by the poisonous might of systematic and institutional racism. This book is an effective preventive treatment to being caught in the lethal trap of financial deprivation. Along with its purpose of being a guide to financial freedom, the author explains the many routes to wealth accumulation.

Jay Z wisely raps about gaining and sustaining financial stability on 4:44: “You can want success all you want, but to get it, you can’t falter. You can’t slip, you can’t sleep. One eye open, for real, and forever.”

Using the lyrics of Jay Z’s album, Mr. Cash links the concept of financial salvation to the smart use of credit, employing other folks’ money to your advantage, making buying of real estate to create wealth. He contracts the concepts of appreciation and depreciation in terms of assets. In his advice of starting businesses, the author promotes the notion of creating multiple streams of income, not putting your eggs in one basket. Above all, Mr. Cash reinforces to spend and save your money wisely so you can pass your wealth to the next generation.

“Leave a mark they can’t erase, neither space or time,” Jay Z sings.

Throughout this book, the author emphasizes protecting wealth through insurance, wills, and trusts. He has no respect for the lazy or those who pursue the whims of instant gratification. He admires the right way to splurge, the correct way to spend with no direction or goal. Spend to own. The writer explains that ownership means nothing can be taken away from you.

One of the most significant parts of the book is his advice to invest in yourself today and put away 10% of your income into an account that is separated from the account to pay bills. He writes: pay yourself first. Also, have a cash account that could sustain you for six to eight months for expenses in case an emergency occurs. He notes to take finances seriously, and understand your needs, assets, wants and liabilities. Keep a spending diary.

In his book, The Wake Up Call, Mr. Cash gives us a blueprint for financial freedom, to assist African Americans in understanding the world of money and debt. This is an exceptional guide from a man raised by a single mother in the Harlem projects who knows how to stretch a dollar. This is a book that no one cannot survive or flourish without it.

Read 1Brick Publishing’s description of The Wake Up Call: Financial Inspiration Learned from 4:44.