Book Review: Life AFTER the Down Low 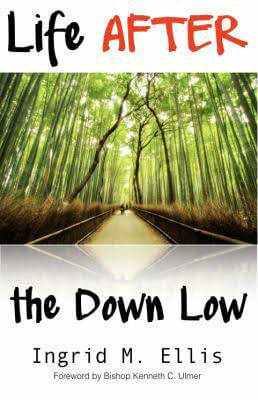 Read a Description of Life AFTER the Down Low

Life After the Down Low is Ingrid M. Ellis’ honest and harrowing account of her life after finding out that her husband, Bobby, the man she thought she’d spend the rest of her life with, is accused of molesting multiple young boys he mentored as a youth pastor. After Bobby admits to having oral sex with a man, and then presents her with a list of other men he has had sex with, Ellis’ world falls apart. She must come to grips with his admission and maintain structure for their young son Cole, while also wondering if she’s contracted AIDS from Bobby.

Ellis opens with Carol’s story. “Carol” also had a relationship with a man on the down low but she was not as lucky as Ellis. Carol contracts AIDS during a time when it is a death sentence. She, like her boyfriend who she didn’t know was gay, succumbed to the disease.

“From afar I always admired Carol… She always spoke publicly about her choices… And she spoke candidly and bravely about her love for a man whose undercover life as a homosexual cost his life and ultimately hers… I thought about Carol the day my blood was being drawn to determine if I had been exposed to the same life threatening virus… Carol and I had both been deceived, yet God’s grace kept me free from illness. In her sickness and death and my health and life, there is purpose…”

As her faith is tested and her church is mired in a hotbed of sexual misconduct, Ellis’ emotional journey is not unlike the five stages of grief—denial, anger, bargaining, depression and acceptance. Ellis progresses through all the stages and eventually comes to acceptance of what has happened in her past and what is happening in her present. Ellis tries to square her relationship with God with all the pain and torment she has suffered. “I was molested at six, rejected by my father, raped at eighteen, cheated on in college and married an imposter…” She must come to terms with her husband’s betrayal not only to her, but also to their church and the community that entrusted him with their children. Ellis decides that it was all for a reason and instead of railing against God and her faith, she finds the power of purpose and uses it to help, not only herself but others.

Despite typos and proofing errors, Ellis’ raw, and unfiltered account of her relationship—after she finds out that Bobby is living a double life in 2007, and then ten years later in 2017, after reevaluating and re-starting her life—is riveting and heartbreaking. In the beginning it reads like a novel you can’t put down. Twelve years after her wedding when she finds out the truth, Ellis considers that perhaps Bobby’s tears in their wedding video are not tears of joy but tears of “pain, anguish, guilt and confusion.” Ellis learned that the night before they were married, after their rehearsal dinner, her husband-to-be had propositioned a male minor for sex.

The shocking news of not only her husband’s infidelity, but that it happened with men, and while he was their mentor and pastor, reverberated through her church community and social life. To make sense of it all Ellis journals, at times, madly. This outpouring is what becomes the first draft of her book and is surely what saves her. However, in these sections, probably half of the book, the thoughts, narrative, and the many scriptures and psalms come fast and furious and are at times confusing and distracting.

Perhaps the most telling narration comes from Bobby himself in an unedited postscript where he writes that he is making amends and that he is not gay. Having been molested at five by a man, having sex or sexual encounters with men is the only way Bobby knows how to show affection to other men, and also because he “never really knew how to be one.” Yet despite his claim of making amends, in 2010, years after his postscript, Bobby kept putting himself in a position—to be in the lives of young sons of single mothers, and young men in general—where he would have access to a new inventory of boys. Ellis believes that her book ultimately became a way for parents to see Bobby’s MO and to fight back. “People from several ministries, schools, law enforcement and attorney’s would randomly contact me to confirm my knowing him and the validity of what they heard regarding the crimes he had yet to be been convicted of.”

Although at times moving, emotive, and lyrical, I wished for more structure of thought, and less scripture interspersed into the narrative, that seemed, at times, like narration itself. This would have been better served by personal insight—but not as it related to scripture—as she undertook her emotional journey with not only her husband and marriage, but also with her friends, family faith, and self. Regardless, I learned a lot from this book and you will too. I learned how the power of purpose can shift our focus from self to others, in a way that is healing and empowering.

Read The Land of Ellis’s description of Life AFTER the Down Low.