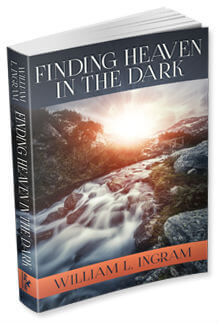 Read a Description of Finding Heaven in the Dark

The story opens in the summer of 1970 almost at the end of Ingram’s journey, which began three years earlier when he deserted the Marines. The narrative is not told in a straightforward beginning to end way, instead it moves from present to past and back again. This nonlinear chronology left me guessing as to how he came to be a seventeen-year-old marine who didn’t fully believe in the war he was about to fight in Vietnam.

We meet Ingram at twenty-one—after his desertion and trek across America, on the run from so many things, the Marines, his family, who don’t know he is a deserter, and himself—when he turns himself in to the Marine Corp. We then go back in time to find out how he lost his way and ultimately finds himself. That journey of self-discovery is both physical and spiritual and starts, as these emotional journeys often do, with our family.

Born in New Rochelle in 1949 Ingram grew up in Hartford, CT. Ingram calls the trials of his early life “a mixed blessing.” “The bastard son of an unwed mother,” he still felt loved by his mother Mary, even though unknown to him, he’d taken on her anger toward men. His five siblings were born after his mother married his West Indian stepfather Jasper. They quarreled often. “Jasper resented that Mary was not submissive to him and openly felt superior. Mary resented that her husband enjoyed making babies but not caring for them.”

His home life was in turmoil, either feast at the beginning of the month when Mary received a welfare check, or famine at the end of the month when the money ran out. When Jasper and Mary separate, Ingram becomes the man of the house. He finds work and does his best to help out financially but he resents giving up most of his paycheck and still at times having to go hungry. When he suggests that Mary give him part of the welfare check so he can save money for the family and help her budget, Mary snaps at him. This wounds Ingram. Already a loner in a family full of people, he retreats further into himself. He spends most of his time in his room escaping into TV shows, hoarding food, and literally eating his emotions. Ingram’s birth father was a moody loner who had died from a drug overdose. Trapped in a life he feels helpless to change Ingram worries that this will also be his end.

Ingram is talked into enlisting in the Marines by his friend Anthony, another equally lost seventeen year old. Swept up in Anthony’s misguided enthusiasm he hopes enlisting will be an escape, or perhaps the direction, missing from his life. But when Anthony fails the IQ test Ingram feels trapped into joining and like so many other things in his life he is swept along on currents he doesn’t know how to resist. This is how he ends up in the Marines. But Ingram does not know that he was on a journey to self, long before he ever left home.

Quickly disillusioned, he deserts the corp and becomes a fugitive on a three-year odyssey. Ingram has based not only his life, but also his journey on the saying, “You’re only as sick as your secrets.” And when you are on the run from seemingly everything and everyone, those secrets not only define you, they also trap you. Ingram doesn’t realize that he can’t run from himself. However it is during his cross-country trek that he finds himself. Along the way he encounters surprising kindness, a waitress offers him soup and crackers as he nurses his coffee, not wanting to go out into the cold. Police officers buy him meals and let him sleep in the empty cells overnight. As he is hitchhiking one night a white man, a reverend, sees him walking in the “wrong part of town” and offers to take him to his house for dinner and a safe place to sleep. Arriving in Los Angeles and looking for a cot for the night he makes his way to the Fifth Street Mission for soup and salvation. Waking up the next morning, fed and in a warm bed he wonders if it was the hand of God that guided him to the kind strangers who helped him, ultimately saving him from himself. Ingram decides to stay and help the mission. When he notes the date on the newspaper, he sees it is his eighteenth birthday and considers it a sign.

Always an avid reader Ingram studies the books in the mission, including the bible. Ingram becomes the cook and his interactions with the brothers and the mission workers teaches him about fragility humanity, humility, and faith. As he bore his guilty secret of being a deserter and worried he would be found out at any moment. He wondered, could he become a born-again Christian, based on a foundation of lies?

Ingram’s journey to answer this question begins when he becomes “fascinated” with “The World of Tomorrow” the broadcast outreach of the Worldwide Church of God. He found the show and its teachings “unique” because they taught that, “In spite of the overwhelming problems around the globe, a divine plan was in place to guide the human race to a better day. We were to become ‘new creatures’ on a restored planet.” This idea of rebirth spoke to Ingram who was seeking his own personal rebirth, and he immersed himself in the church and its literature. Through the church and meditation he learned how to release judgment of himself and his shortcomings. It is through these teachings that Ingram starts to accept himself and, three years later, he goes back to the Marines and turns himself in. When he has served his time he is then able to reunite with his family, a better man for having left.

Ingram is a natural storyteller. Finding Heaven in the Dark is well written, heartfelt and readable. However, his path to self, through religion and meditation using this particular practice and teachings, is immensely personal. His belief system won’t be for everyone and at times it bordered on proselytizing, however his search for self, self-love and self-acceptance is universal. Ultimately, Ingram is asking big questions—questions we’ve all contemplated at one point or another—about existence, about faith, about how our choices make us, for better or worse, who we are. What he learns is that it is not what happens to us, but how we handle it, that really shows our strength of character. How he comes to this discovery isn’t really the point, it’s that he comes to it it all. That he finds redemption, faith, and self-acceptance in a life filled with such hardship, gives hope to all of us. And that is really the point.